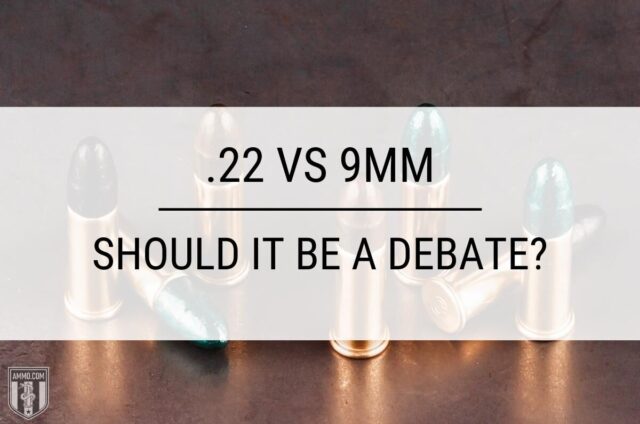 My first “real” gun was a Ruger 10/22, which shoots 22 long rifle, while my first concealed carry pistol was a Smith & Wesson 9mm Shield.

My grandfather owns a varmint gun chambered in 22 Mag, which we often shot growing up.

To say I have a lot of experience with both calibers as a gun owner is an understatement.

I believe each caliber has its proper place, and both should be in your gun safe.

However, that doesn’t mean they should be used for the same reasons. Each round outshines the other in specific instances.

As we compare the .22 vs. 9mm, you’ll see why I believe everyone should own both for different scenarios, but if I were forced to choose just one, it’d be the 9mm because of its reloadability and higher knockdown power.

The 22 and 9mm were created for different purposes, so these rounds are very dissimilar.

For instance, the 22 caliber is a rimfire cartridge, while the 9mm is a centerfire cartridge which makes reloading the 9mm possible, unlike 22 brass.

The bullets of a 9mm Luger are much larger than a 22, which means their trajectories and recoil will vary.

Let’s get into the meat and potatoes of the 22 vs. 9mm comparison.

We will discuss a few different cartridges for the 22 caliber, the 22LR, 22WMR, and 22 Short, but we’ll focus on the two most common rounds, the 22 Long Rifle and the 22 Winchester Magnum Rimfire. 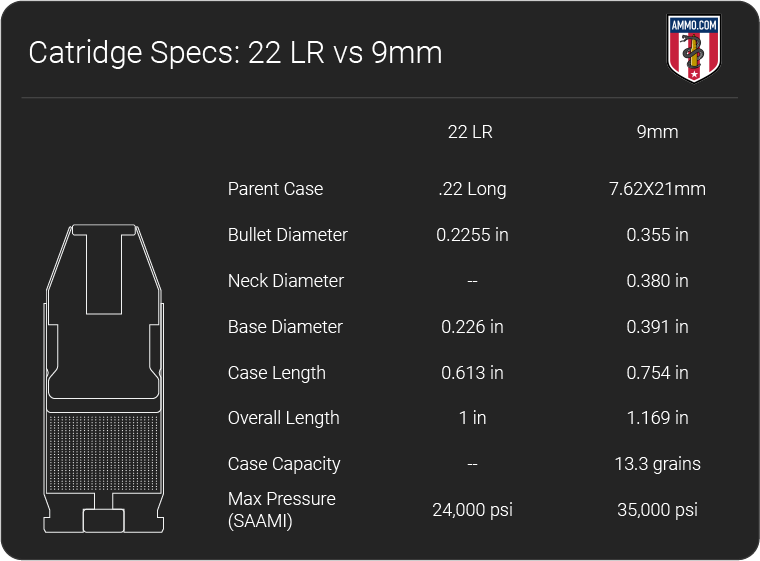 If you have zero experience with these cartridges, you might think they’d be easy to mix up.

The 22 Short, as you can guess, is shorter than the other cartridges. The overall length is only 0.695″, and the bullet diameter is smaller at 0.222″.

The 22 Short isn’t as common, so we will focus on the 22LR and 22WMR for the rest of the article.

Felt recoil is determined by the weight of the gun and the bullet weight.

So no matter how you slice it, the 9mm will have more recoil because it needs a larger cartridge with more capacity to fire the larger bullet.

The 22 Short will have the least amount of recoil, but the 22 Long Rifle and 22 Mag hardly have any recoil. 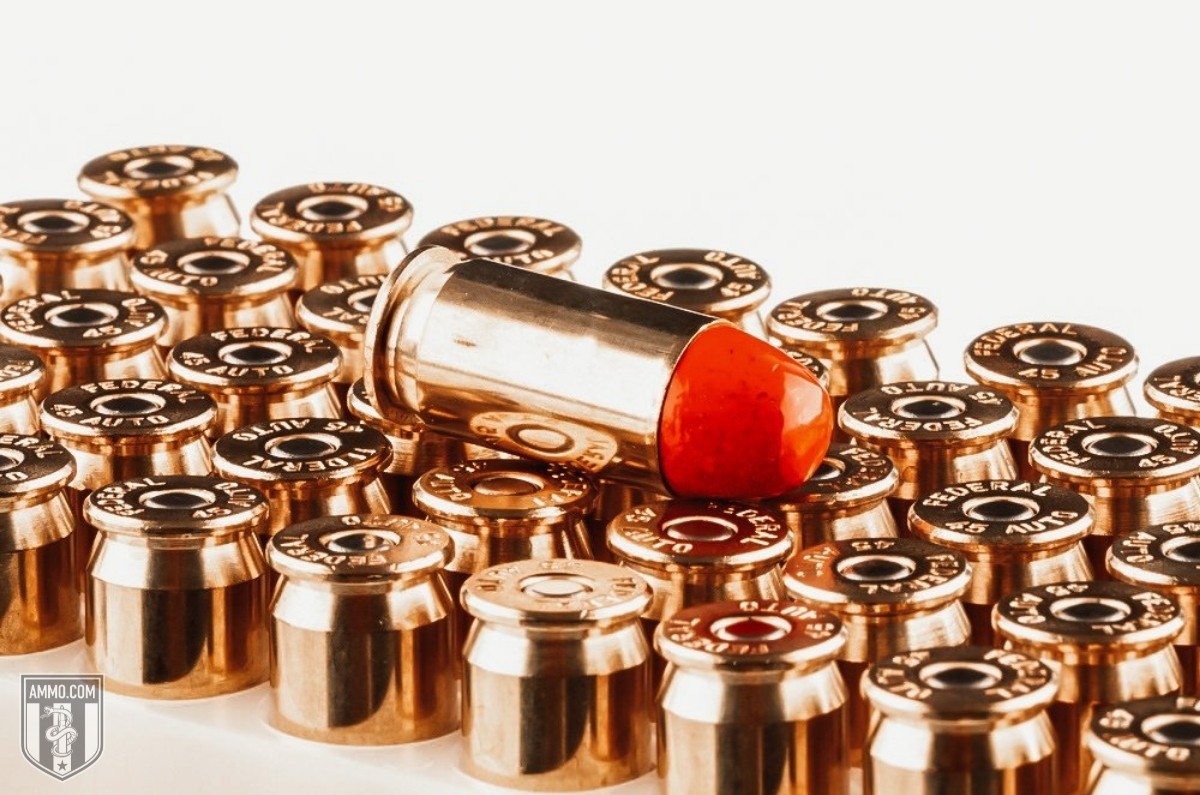 This is why so many shooters are introduced to firearms using a 22 caliber. If you have a child or adult reluctant to shoot because they’re afraid of the recoil, then the 22 is the best way to help them see there’s nothing with which to be concerned.

With that said, the 9mm Luger is not a high-recoil caliber. The 4-8 ft-lbs of recoil is a great “next step up” for the new shooter because it’s still easy to get follow-up shots off in a semi-auto.

The experienced shooter will have no problem handling a 9mm pistol while target shooting.

If you’re solely focused on feeling less recoil, then it’s no contest the 22 caliber wins.

The bullet’s trajectory is the path that it takes to the target. The track is an arch because of gravity.

We prefer flat-shooting rounds because they require less adjusting as the distance to the target increases.

Neither caliber was designed for long-range shooting, so each one has a poor trajectory.

The 9mm was designed for handguns, so a 100-yard shot is not recommended.

The 22 vs. 9mm trajectory contest is easily won by the 22, but it’s most often shot from a rifle, so we expected this outcome.

Accuracy depends on many factors, including the gun, optics, shooter, and quality of rounds. 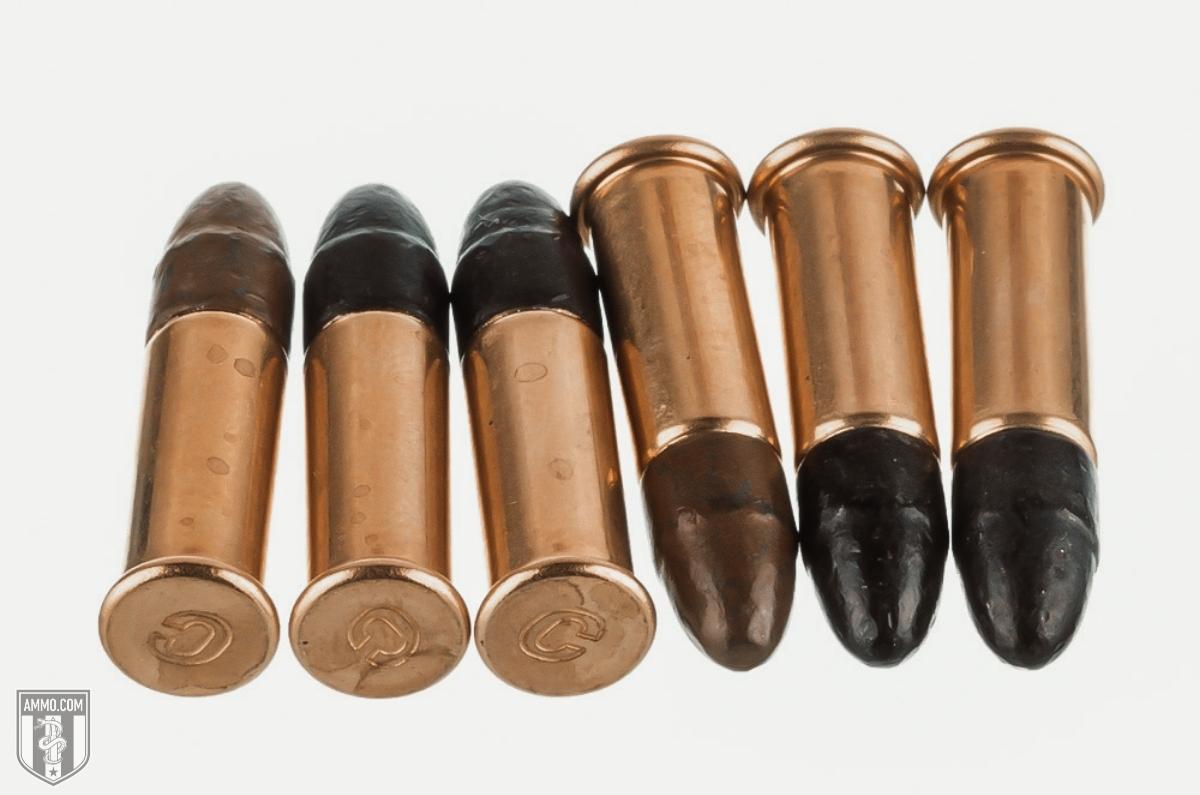 Most shooters will find the .22 caliber to be more accurate than the 9mm because of the less recoil and flatter trajectory.

Stopping power is an immeasurable term that most firearms enthusiasts use. When speaking of stopping power, we often mean the ability of the round to stop a threat immediately.

Bullet selection greatly factors into the debate, but a larger bullet will generally have more stopping power.

A hollow-point bullet will have more stopping power than a Full Metal Jacket (FMJ) of the same caliber.

The stopping power of the 22 Long Rifle doesn’t compare to the larger 9mm.

The 9mm easily wins the section.

Growing up, I hunted rabbits and squirrels with a Ruger 10/22 22 LR. It could take out a coyote with a well-placed shot, but I would recommend stepping up to a 22 WMR for coyotes and groundhogs.

Attempting to take any game larger than a coyote with a 22 is illegal in most states.

I have never personally hunted with 9mm ammo, nor would I recommend it to anyone. Still, a 9mm Luger has the capabilities in close range to take down a deer if you’re in a desperate situation.

These calibers weren’t intended for big game hunting, but the 22 has a slight advantage for small game hunting situations. 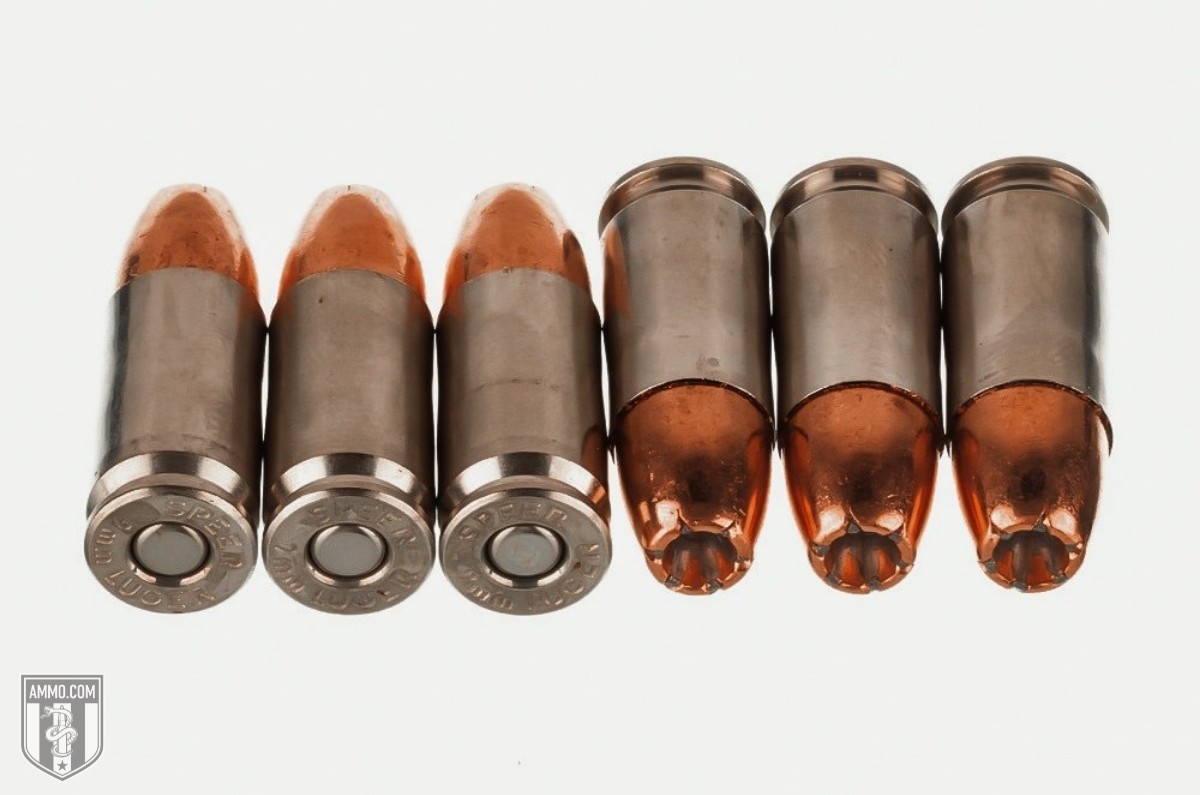 Most people will agree that the 9mm is the better-concealed carry and home-defense option because it has more stopping power and is just as easy to conceal.

Because so many shooters enjoy both calibers, ammo and gun availability are exceptionally high compared with many other calibers.

Manufacturers like Glock and Ruger offer both calibers chambered in a pistol, while companies like Henry, Winchester, and Remington offer 22 LR and 22 WMR rifles.

The 9mm is found in a carbine; that’s a lot of fun to shoot.

Gun cost varies significantly from manufacturer to manufacturer and pistol vs. rifle, but both calibers offer guns at all price ranges.

The price of ammo is where the 22 LR separates itself from the competition. It’s often the cheapest ammo you can purchase. 22 WMR is usually 2-3 times the price of 22 LR because fewer manufacturers make it.

9mm is also typically two times the cost of 22 LR, but that’s expected since it requires a larger bullet, case, a primer, and more gunpowder.

Buying in bulk is always smart, make sure to check out our stock of 9mm bulk ammo and bulk 22lr ammo. 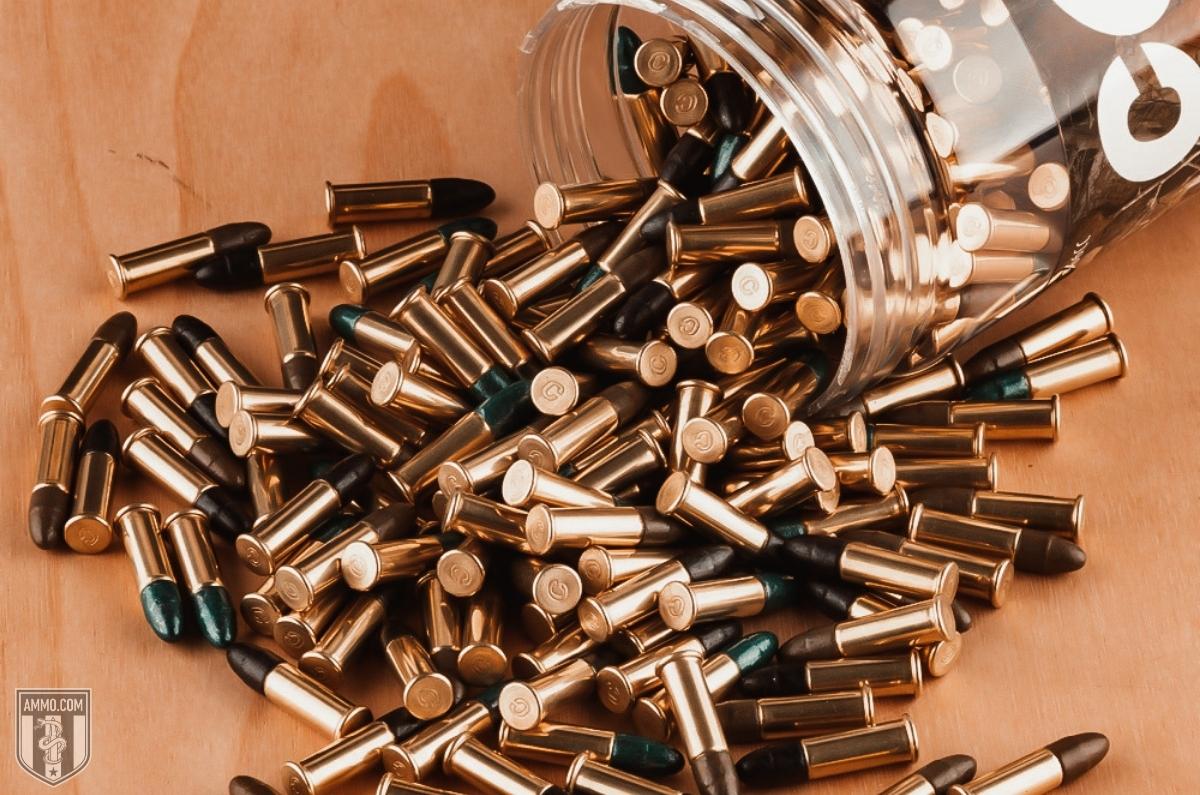 Reloading is the best way to control the controllable variables. It’s also an excellent way to save money on ammo.

Handloading 9mm rounds is very common, which makes finding all the essentials difficult in times of low product availability. This also means 9mm primers, bullets, and gunpowder will be some of the first back in stock.

While handloading 22 LR is not impossible, it’s much more hassle, and your options are minimal. Only a couple of companies offer reloading equipment for 22 LR.

Since they’re rimfire cartridges, they require a special powder that a typical shipping process can’t ship. Though it is much cheaper, reloaded 22 is less reliable than factory ammo.

If you enjoy reloading, 9mm ammo is the way to go since the equipment is much easier to obtain.

The team at Ammo.com has crafted the ballistics charts for the 9mm and 22 Long Rifle and 22 Winchester Magnum Rimfire. 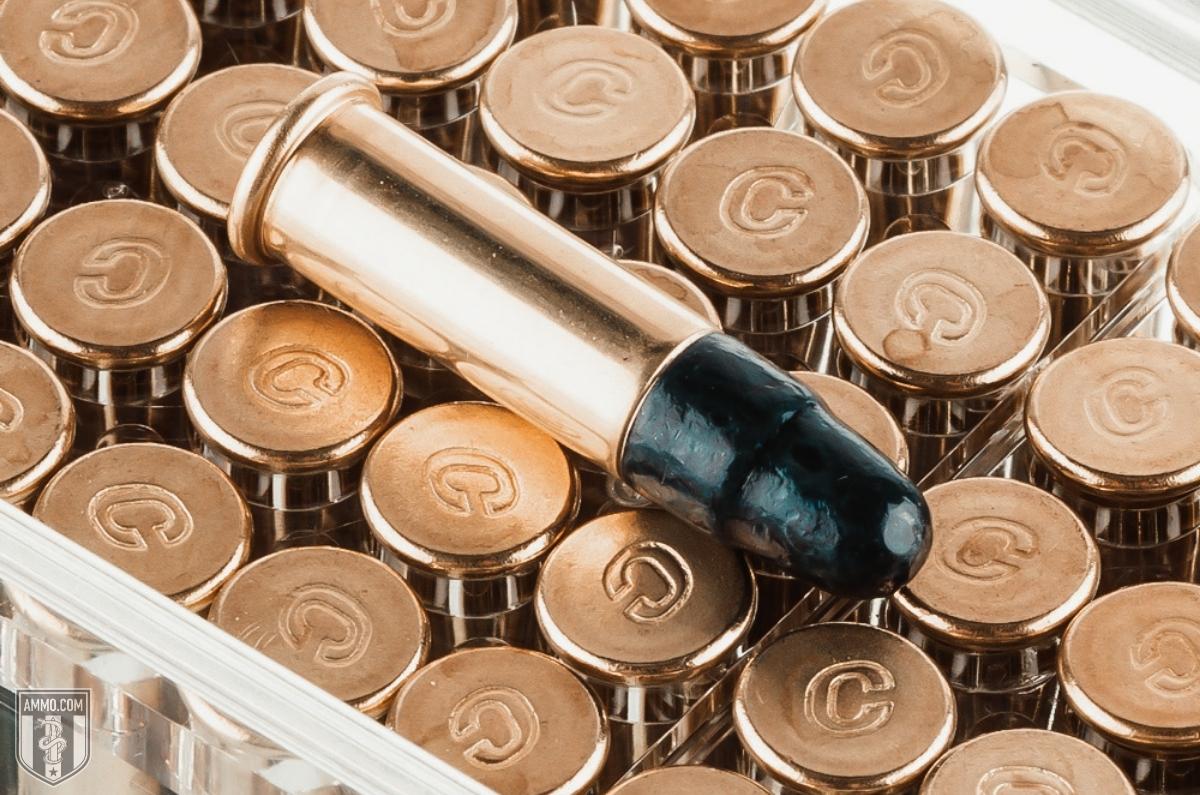 The Stevens Arms Company began developing the 22 LR rimfire round from the case of the 22 Long and the 40-grain bullet of the 22 Extra long in the late 1800s.

In the last 130+ years, it has skyrocketed to the most popular round with few competitors because of its low recoil and inexpensive rounds.

The 22 LR has been chambered in almost every gun imaginable with a wide variety of bullet weights from 20-60gr with muzzle velocities ranging between 575 to 1,700 fps.

Bare lead, copper plated, full metal jacket, hollow point, and No. 12 snake shotshells all make up the varieties of bullets available in 22 LR.

It was developed by elongating the anemic .22 WRF cartridge to fire a 40-grain bullet at 2,000 fps.

The 9x19mm Luger is, known as the 9x19mm, 9mm Parabellum, or simply the 9mm, was developed by the Austrian gunsmith Georg Luger in 1901.

After World War I and World War II, 9mm became a popular cartridge amongst military and law enforcement in Europe. However, it didn’t become common in the US until the 1980s when the US Army adopted the Beretta M9 Service Pistol. 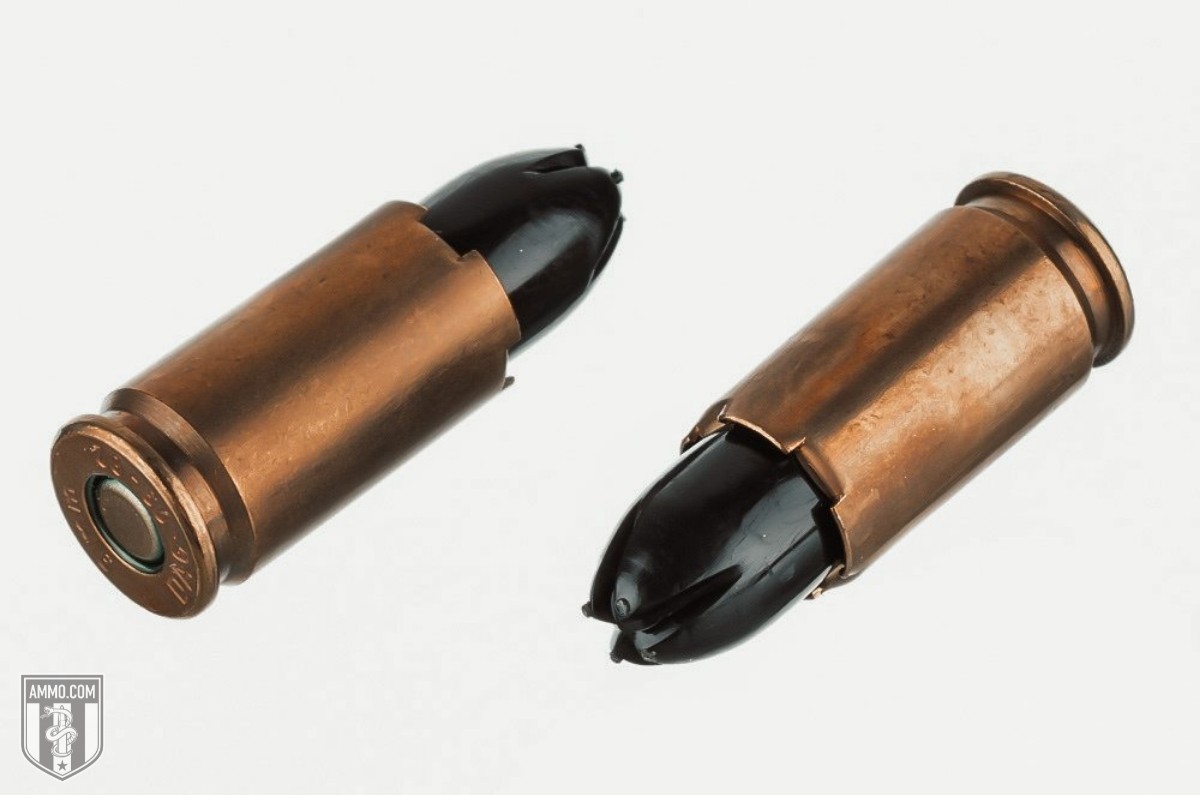 The 9mm Luger erupted in the United States in the ’80s and ’90s when Glock introduced the Glock 17 and the Sig Sauer P226 hit the market. More recently, the Springfield XD and Smith & Wesson M&P have continued to spread the popularity of the 9x19mm to the concealed carry community.

However, if you can’t convince your significant other about the benefits of owning both rounds, I would stick with the 9mm.

Its low recoil, higher stopping power, availability of reloading supplies, and versatility make it the better round.

You can’t go wrong with 22LR ammo for a day of plinking, and varmints don’t stand a chance at 100 yards with the 22 WMR and good shot placement.

.22 vs 9mm: Should It Be a Debate? originally appeared in The Resistance Library at Ammo.com.