Home Opinion Antifa Picked A Fight With A Biker Gang And Instantly Regretted It... 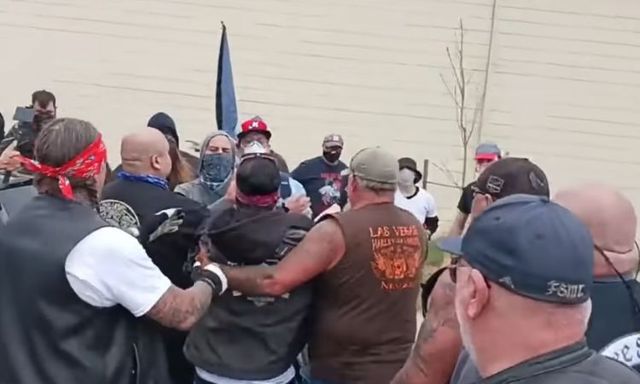 Antifa masked terrorists are clearly the enemy of this constitutional republic. They are as clear of a danger to it as the teachers, politicians, and media that coach, train, enable, and even cheer them…and yes, join them.

They are at every level, not just in Oregon. They are in your state, your city, your neighborhood. Portland has become a magnet for Antifa rioters given the city’s liberal stance.

Well, Antifa ran into some bad luck the other day.

They picked a fight with the wrong group, and within two minutes, were chased off, like the rats they are.

It happened in Salem, Oregon, where Antifa showed up to shut down a local bar called “Honky Tonk.”

An Antifa direct action broke out in Oregon on Saturday, where members of the far-left violent extremist movement suffered a humiliating defeat after the group was confronted by a group of women and bikers protecting a Salem bar hosting a family barbecue event, according to The Post Millennial.

The confrontation appears to have now ignited a feud between Antifa and members of various Oregon motorcycle clubs.

Antifa had tried to shut down the Honky Tonk bar in Salem, Ore.

In live stream footage, a group of bikers can be seen approaching a group of Antifa that were gathered across the street from Honky Tonk bar, with their identities concealed behind face masks, hats, and other gear. Yelling and eventually shoving breaks out between the two groups.

“Get off my f—ng car, c—nt,” a woman yells before a scuffle and pepper spraying breaks out.

As the video continues, Antifa can be seen pushing back against women in the biker group. Some of the Antifa were punched.

“Stop hitting women, you piece of sh—,” an individual can be heard yelling.

The group of Antifa then retreats down the street.

Antifa accounts on Twitter claimed that one of their comrades had to go to the hospital for treatment, though they did not say who or provide any evidence for the claim.

You can watch the video below:

And now they want war with the biker gangs:

It’s not for everyone obviously but for those of us who are comfortable going into actual battle we need to organize so that we can offer some solid opposition to groups like MCs who are comfortable shooting first and need little reason. Your 100% correct, they aren’t like PBs

If anyone with an ounce of gumption confronts Antifa, they’re in big trouble.

This is not a group of warriors or heroes by any stretch of the imagination.