A violent black mob beat a disabled driver with a cane after he accidentally hit a car that was pulling donuts on a street in Los Angeles, the video originally posted on Instagram and removed shortly after shows.

They were filmed squaring up to him even as he wailed ‘Sorry! Sorry!’ and ‘I’ll give you everything I got bro.’

His pleas ended up falling on deaf ears, with one man seen punching the terrified Honda driver in the face even after realizing he was disabled.

The terrifying video has one moment of karmic justice.

The video that we have a copy below shows a crowd gathered around Broadway & 121st Street in LA, watching a driver skid in circles around the intersection, when a grey Honda driving past slams on its brakes, but is unable to stop, T-boning the red Chevy SS.

But the crash is just the start of it for the Honda driver; the incensed mob quickly turn on him, crowding around his car and smashing it up.

As the badly damaged Honda tries to crawl away, dozens swarm on it, jumping on the roof and kicking the windows in; one man jogs beside the car and repeatedly attempts to put his fist through the drivers-side window.

Standing on the trunk, another man finally smashes through the back window and climbs into the back of the car, intent on opening the doors to let the rabble in at the terrified driver.

But the maneuver comes with a bit of karmic justice; as he opens the rear locked door from the inside and slips out, one of the gang appears to think he is the driver escaping — and knocks him out cold with a punch to the head.

Leaving his fellow mob member knocked completely out of his shoes and unconscious, the lead assailant returns his concentration to the driver’s door, unconcerned. 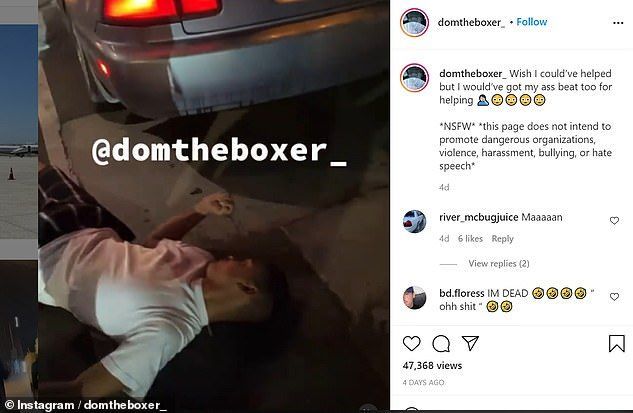 The crowd appeared to calm down on seeing the Honda driver’s cane and cast – but one man continued to confront the terrified driver, and landed at least one blow on him.


At one point, one attacker appeared intent on robbing the man’s cane, but moments later he appeared to have a change of heart, and returned it.

The scene ends with the crowd fleeing as police make their way to the incident.


** (Disclaimer: This video content is intended for educational and informational purposes only) **
LAPD had no reports of the incident from that location.