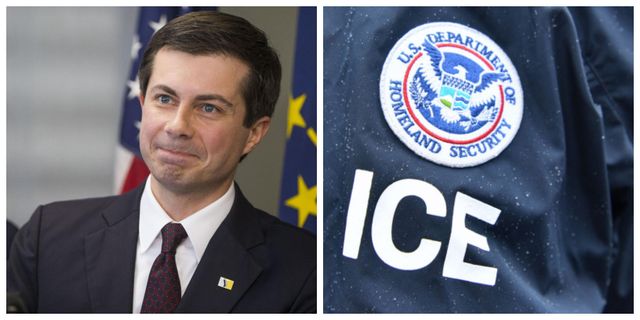 Democratic presidential hopefuls went far left when they agreed that they would support healthcare for illegal immigrants. They also support no deportations of illegal migrants whose only offense is being undocumented and they want to decriminalize crossing the southern border illegally.

NBC anchor Savannah Guthrie asked the candidates, who were lined up on the stage, if their universal health care plans would include “undocumented immigrants.”

The candidates on the stage, who represent about one-half of the candidates running for the party 2020 nomination, all raised their hands in unity.

One of the candidates that raise his hand was the former mayor of South Bend, Indiana Pete Buttigieg.

It seems that Pete is in big trouble.

The “phone tree,” according to The Daily Beast on Wednesday, was one of several actions Buttigieg took to protect illegal immigrants in his town. Phone trees consist of an automated calling system that helps spread messages quickly and efficiently.

Those would presumably help alert immigrants to the type of surprise raids that resulted in nearly 700 arrests in Mississippi.

His approach to immigration came under legal scrutiny when Judicial Watch, a right-leaning organization, sued the city over a “Community Resident Card” program that Buttigieg reportedly developed with the help of La Casa, a left-wing, pro-immigration group.

Also his former administration got slapped with a lawsuit from Judicial Watch.

Judicial Watch announced today that it filed an Access to Public Records Act (APRA) open records lawsuit against the City of South Bend, Indiana, for records of communications between Mayor Pete Buttigieg’s office related to the creation of a municipal ID card for illegal aliens that was created by La Casa de Amistad, a local not-for-profit corporation (Judicial Watch v. City of South Bend (No. 71C01-1908-Ml-000389)).

On December 16, 2016, the South Bend Tribune reported that, “A nonprofit Latino advocacy group … unveiled a new identification card it hopes will make life easier for undocumented immigrants who live in [South Bend].” La Casa de Amistad Inc. are the creators of this “SB ID.” Mayor Pete Buttigieg reportedly worked “closely with La Casa de Amistad, South Bend’s main Latino outreach center … and the nonprofit’s executive director, Sam Centellas,” to create a “Community Resident Card … created and distributed by the group — a private organization — not the city.”  “Buttigieg’s part to make it all work was to sign an executive order requiring local services and institutions — like law enforcement, schools, the water utility and libraries — to accept the card as a valid form of identification.”

Judicial Watch filed suit after the City of South Bend failed to respond as required by law to open records requests on June 22, 2019, seeking emails between Buttigieg, members of his staff and officials of La Casa de Amistad regarding the Community Resident Card program.

Prior to South Bend ignoring the June 22, 2019 APRA request, the city refused Judicial Watch APRA requests for similar public information multiple times between June 24, 2019 and July 18, 2019.  Each time, South Bend said the requests were too broad and not “reasonably particular.” After each refusal, Judicial Watch would comply with South Bend’s suggestion to limit their request.  After four exchanges, South Bend produced Mayor Buttigeig’s executive order and 2 information bulletins that were already publicly accessible.

“Mayor Buttigieg’s city administration in South Bend is in cover-up mode on his work for special ID cards to make it easier for illegal aliens to stay in the United States contrary to law,” said Judicial Watch President Tom Fitton. “Judicial Watch made simple open records requests and have faced nothing but games from the Buttigieg administration – which is why we had to sue.”

Judicial Watch is represented by Andrew B. Jones of the Jones Law Office LLC.

Buttigieg is just following the footsteps of other Democrats, let’s hope that Judicial Watch can get the job done and that they will expose other Democrats.