Home Culture Caliber Comparison: Understanding the Difference Between 308 and 556

The .308 Winchester (.308 Win) and 5.56 NATO rounds are two of the most popular centerfire rifle cartridges in the United States and across North America. Both cartridges are battle-proven and currently in service with the U.S. Military and its NATO allies.

The 308 vs 556 debate has been raging between civilian marksman, law enforcement, and military shooters for well over 60 years and is akin to a clash of heavyweight titans nothing short of Ali vs Frasier.

Sufficed to say, it is unlikely that we will be able to crown a victor in the context of this article.

However, get ready for an absolute knock-down, drag-out, slugfest between two of the most popular and iconic cartridges in shooting!

A Quick Note on Nomenclature

However, please understand that rifles chambered in 308 and 223 are different than those chambered in their NATO spec equivalents, 762 and 556, respectively.

It’s important to note that NATO spec ammunition should ONLY be fired from rifles chambered to NATO specifications.

Bottom line: Know what round your rifle is chambered in (it’s typically engraved on the barrel or receiver of your rifle). 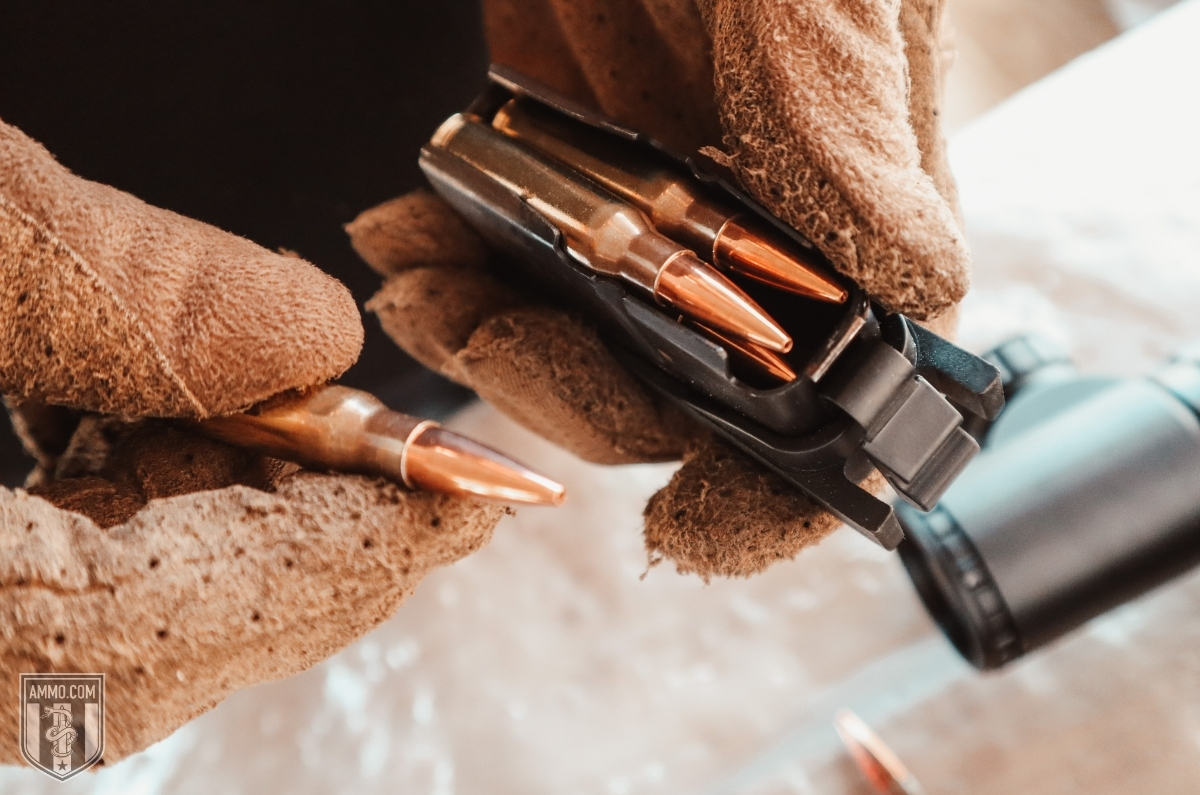 Following the end of the Korean War, the U.S. Military started developing a replacement for the storied M1 Garand. Although the M1 Garand had served the U.S. Armed Forces valiantly through World War II and Korea, the military wanted a more modern service rifle with select-fire capability and detachable magazines similar to the Stg-44 and AK-47.

The M1 Garand was chambered in the 30-06 Springfield cartridge, 7.62x63mm NATO designation, a round that has been credited with taking down every North American large game animal, including the great bears.

With advancements in rifle powder technology and case design in the 1950s, the new 7.62x51mm NATO rifle round was able to achieve neatly identical ballistic performance as the 30-06 Springfield with a shorter cartridge case length and lower overall weight.

The US Army officially adopted the 7.62x51mm NATO round and the new M14 battle rifle in 1958. The M14 featured a 20-round detachable magazine and select fire capability (semi-auto and full auto).

The M14 saw its first action in the Vietnam War before being quickly being replaced by the M16 in 1964.

762 has also been utilized in multiple machine guns fielded by the U.S. Military, including the M60, M240B, and GAU-17/A minigun.

Seeing the potential of the 762 in the civilian market, Winchester was quick to adapt the new rifle round to its Model 70 bolt action rifle. The civilian version of the 7.62 was named the .308 Winchester.

The 308 Winchester has since become the most popular big game hunting round in the world with bullet weights typically ranging between 120 to 180 grains.

With astounding accuracy, stopping power, and an effective range out to 1,000 yards (with appropriate loadings), the 308 is a staple in deer hunting camps and in marksmanship competitions across the globe. 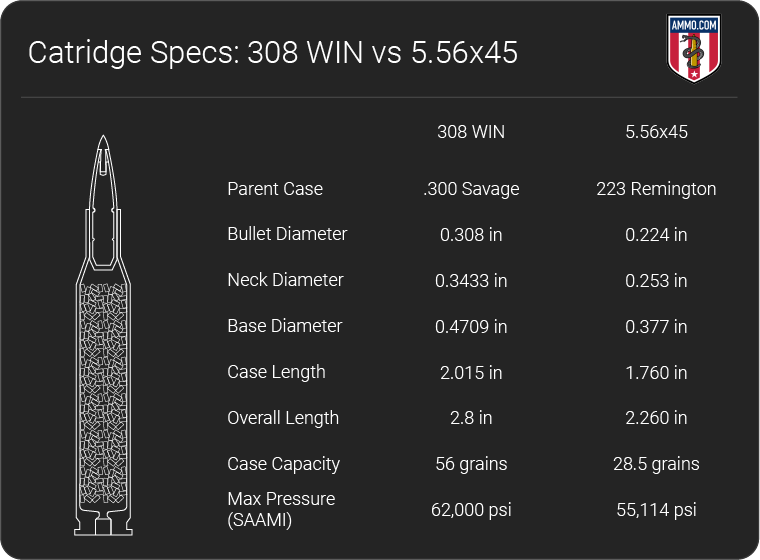 The 5.56x45mm NATO cartridge was derived from the .223 Remington (which itself descended from the .222 Remington). Development of the 223 Rem rifle round began in 1957 and the final design was submitted by Remington Arms to the Sporting Arms and Ammunition Manufacturers’ Institute (SAAMI) in 1962.

The development of the 223 Remington cartridge was a joint operation organized by the U.S. Continental Army Command between Fairchild Industries, Remington Arms, and Eugene Stoner of Armalite.

Eugene Stone was the primary inventor of the AR-10 rifle (chambered in 7.62), which he was invited to scale down to accommodate the new .223 Rem cartridge.

The resulting rifle was the AR-15, which has become the most popular sporting rifle design in the United States. The military adopted a select-fire version of the AR-15, designating it the M16 in 1964.

However, the primary difference between the two cartridges is the maximum pressure allowance for the rifle rounds.

SAAMI specifications for the .223 Rem indicate that a maximum allowable chamber pressure of 55,000 psi. However, the 5.56 case was designed to handle pressures up to around 61,000 psi.

This is why you should NEVER fire 5.56 from a firearm chambered in .223 Rem, as the chamber a rifle chambered in 223 Remington is not rated to handle the pressure of a 5.56 round.

The 223 was quickly adopted to both AR platform and bolt action rifles from all major firearm manufacturers. Its low recoil impulse and flatter trajectory makes it ideal for marksmanship trials and varmint hunters.

Now that you have a clearer understanding of where each round came from, it’s time to ring the bell and let these two heavyweight sluggers throw hands! We’ve got 8 rounds (categories) for these two NATO pugilists to contend in.

The 223 and 556 rounds were developed in response to the military’s need for a lower recoil battle rifle/carbine.

Although the 308 Winchester cartridge is a capable rifle round, it has almost double the case capacity and fires much heavier bullets. All of this adds up to considerably more felt recoil when shooting a 308.

The lower recoil of the 556 allows for higher accuracy and faster follow-up shots when engaging targets in semi-automatic or fully automatic fire.

This is perhaps one of the biggest advantages of the 223 over the 308. The 308 Winchester is considerably heavier than its 223 Remington counterpart and soldiers can carry considerably more 223 into battle.

This was one of the main reasons for the development of the 556. Assuming a 22-pound ammo loadout, a soldier can carry approximately 660 rounds of 223 vs only 280 rounds of 308. 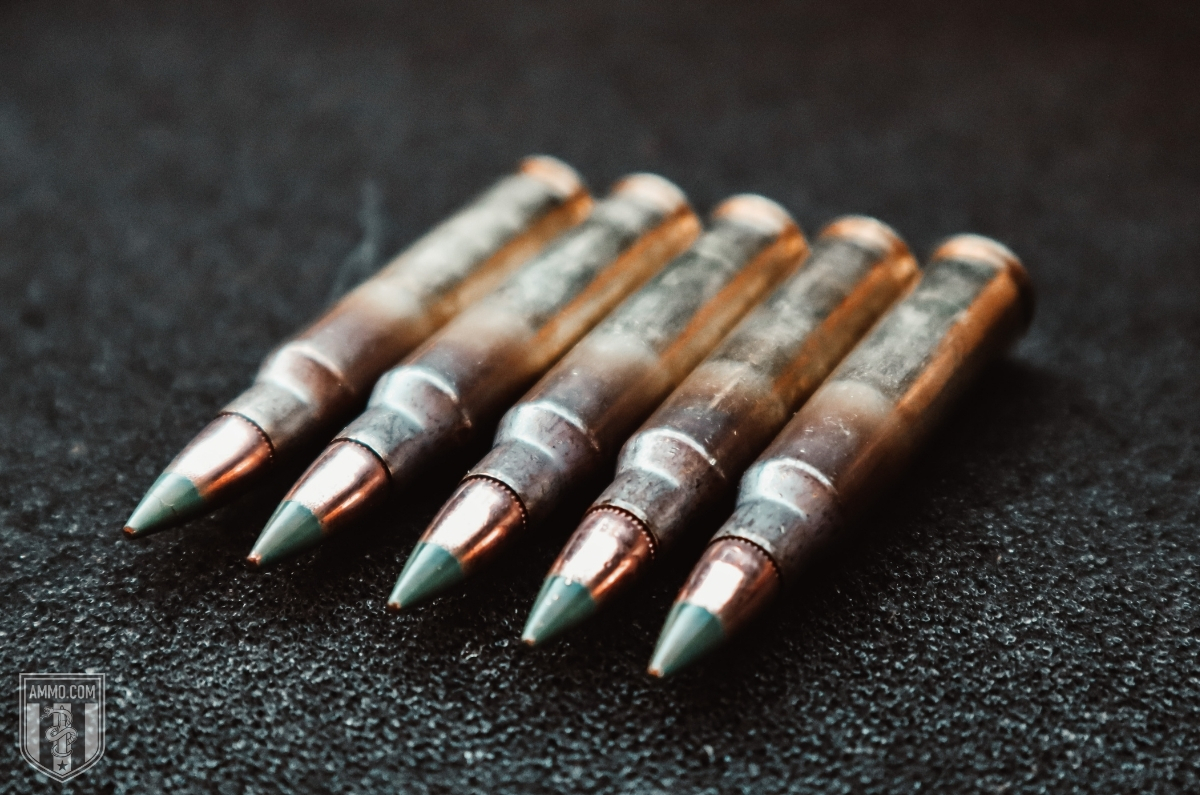 7.62 was developed to have outstanding accuracy at longer ranges. Standard 308 Win loadings can still be combat effective out to 1,000 yards.

By comparison, the 5.56 is typically only considered effective out to about 500 yards.

When shooting out past 500 yards, wind drift becomes a major issue. With a heavier bullet, the 308 is going to be less affected by wind conditions than the lighter weight 5.56 rifle round.

Military and Law Enforcement snipers have long favored the more powerful 308 Winchester round for its accuracy and effective range.

Barrier penetration, or lack thereof, has been one of the biggest critiques of the 5.56 since its inception.

The 223 is faster but lighter in weight, and is therefore much more susceptible to deflection and tumbling when it encounters an obstacle when compared to the much heavier 308.

This was a major issue during the Vietnam War and why many veterans of that war are somewhat sour on the M16 rifle.

The newer 5.56 round has somewhat better barrier penetration when compared to the initial design of the 223 Rem, however neither compares to the raw penetrating power of a 147 grain bullet fired from a 308 Winchester chambered rifle.

Both the 5.56 and the 7.62 are going to be extremely effective during a self-defense situation.

Both cartridges are combat-proven and lethal within self-defense ranges.

The only caveat is that the 308 will be more prone to over penetration in a home defense situation, which is why I have to give a slight edge to 5.56.

Both the 308 and 223 are extremely accurate and reliable. Under 500 yards it is unlikely a shooter will be able to detect any noticeable difference in accuracy between the two rounds.

With its heavier bullet, the 762 has almost double the energy (ft-lb) at the muzzle when compared to the 5.56 round. We will cover more of the ballistic data below, however there’s no denying the sheer power and force of the 308 Winchester, which is why it is the ideal choice for big game hunting as well. 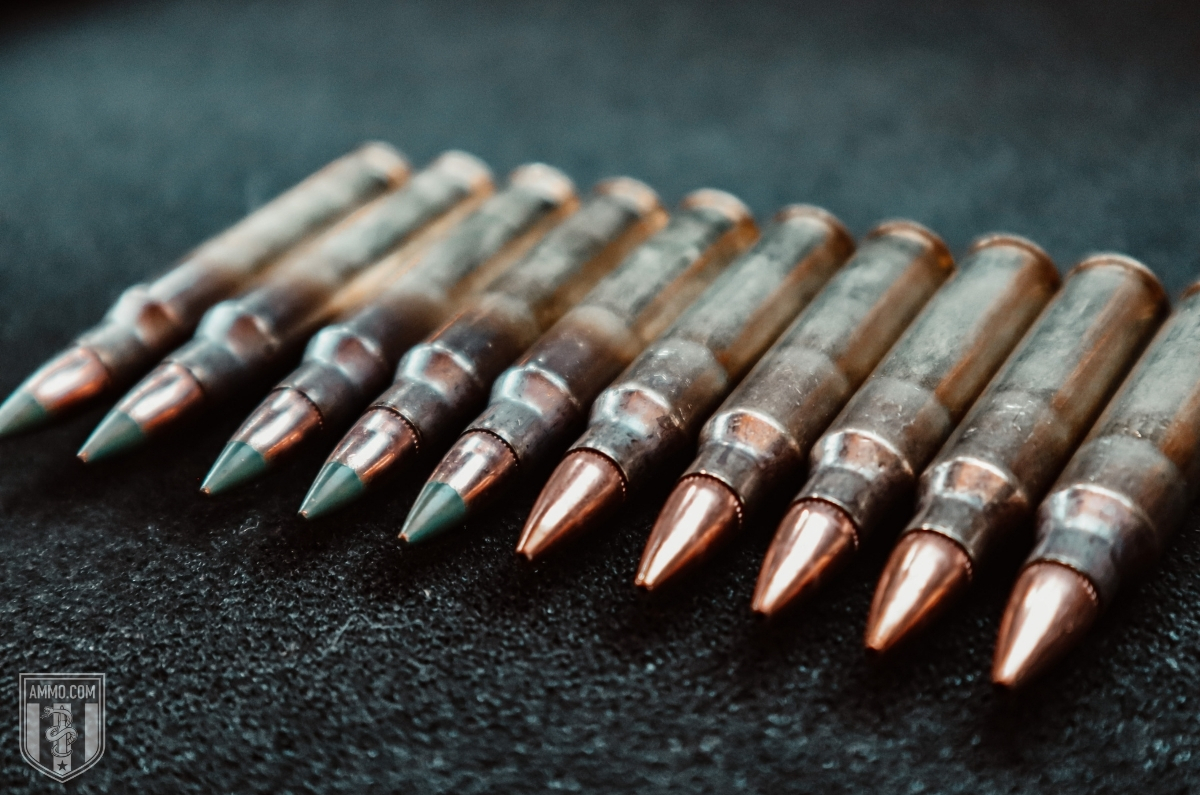 Both the 223 Remington and the 308 Winchester are a dream to reload.

With a plethora of suitable powders, different bullets to choose from, and plenty of brass cartridges available on the secondary market, it makes reloading 223 and 308 a fun and enjoyable experience.

The average hand loader can easily produce match-grade ammo that is tailored to their rifle without the cost of purchasing match ammunition.

Honestly, this one is simply too close to call and we’re going to have to go to the judge’s scorecards to make a final determination.

But that judge isn’t me, it’s YOU!

The real difference between these two calibers is what your intended purpose is.

Looking to take down North American large game starting at deer and going up thorough Elk? Then look no further to the 308 Winchester with a box of hunting soft points to get the job done!

Maybe you’re looking to get into long range shooting out past 500 yards? 7.62 get’s the nod here as well with some high quality match grade full metal jacket (FMJ) ammo.

Maybe you’ve got a lot of varmints around your ranch and you need something light weight with fast follow up shots? Then an AR-15 or bolt action 223 Remington rifle will serve you well harvesting small game as your hunting rifle of choice.

Or perhaps you just want to get out to the range and have a good time plinking or target shooting with some cheap FMJ ammo? 5.56 takes this tile as well.

And then, of course, maybe you just want to enjoy your 2nd Amendment Rights and enjoy the freedoms our Forefather’s fought for? Then get both and see the benefits and limitations of both 223 and 308.

No matter which caliber you chose as the winner of this heavyweight bout, pick something that you enjoy shooting and get out to the range and see how tight you can make those 100-yard groupings!

And remember, buying in bulk is always smart, make sure to check out our stock of bulk 308 ammo and 5.56 bulk ammo.

For all my readers who love the numbers, we have made an outstanding ballistics table comparing both .308 and 5.56.

We’ve compared velocity in feet per second (FPS), energy in foot-pounds (ft-lb), and bullet drop at various combat yardages to help you pick the best caliber for your intended purpose.

Caliber Comparison: Understanding the Difference Between 308 and 556 originally appeared in The Resistance Library at Ammo.com.