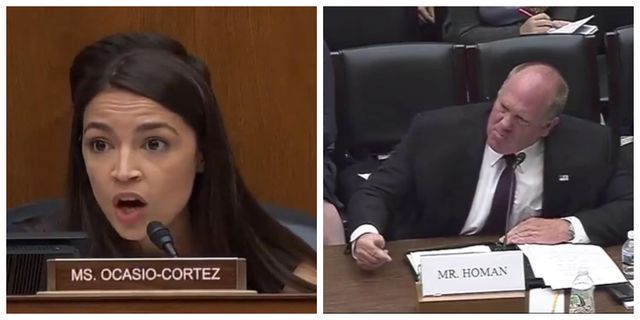 Again Ocasio-Cortez continues to show her complete and total ignorance of our laws and the way and reason they are administered!

Today she had a fierce argument with former ICE director Tom Homan.

The exchange began when Ocasio-Cortez tried to nail Homan down as being the “author” of the “family separation policy” memo, which he had signed.

Homan answered that he had made “numerous recommendations” to Homeland Security, including implementing a “zero tolerance” policy for illegal border crossers.

“The same as it is with every U.S. citizen,” Homan shot back. “Parent [who] gets arrested with a child.”

Ocasio-Cortez said, “Zero tolerance was interpreted as the policy that separated the children from their parents.”

“If I get arrested for DUI and I have a young child in the car I’m gonna be separated,” Homan said. “When I was a police officer in New York and I arrested a father for domestic violence, I separated that father from his family.”

“Mr. Homan, with all due respect, legal asylees are not charged with any crime,” said the congresswoman.

“Seeking asylum is legal,” she insisted.

Watch the interesting video below:


I am o proud of Tom Homan for putting her in her place as you answered everything she threw at you and everything you said was all true our own people get separated from parents too so proud of you bringing that up.