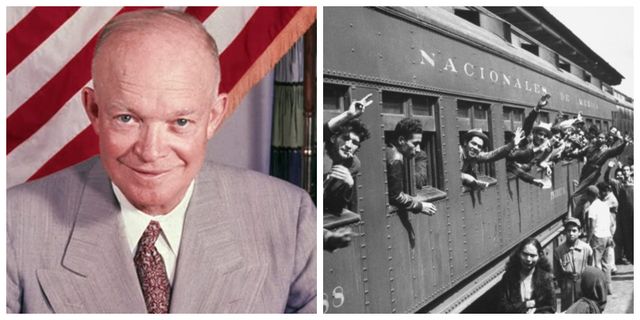 This is not the first time the US has dealt with an illegal immigration problem. Only last time it was dealt with in a decidedly swifter and sterner manner.

In 1955, thousands of disoriented illegals roamed the city’s streets sun bore down on them. They had just been deported there by American immigration officials.

These Mexican immigrants had been caught in the snare of Operation Wetback, the biggest mass deportation of undocumented workers in United States history. As many as 1.3 million people may have been swept up in the Eisenhower-era campaign, which was designed to root out undocumented Mexicans from American society.

There was not much in the way of sympathy for those who had crossed into the country illegally.

These illegals weren’t just dropped at the border; Swing arranged and trains to take immigrants deep into Mexico before . Tens of thousands more were shipped by boat from Texas to Vera Cruz, Mexico.

With the help of the Mexican government, which sought the return of Mexican nationals to alleviate a labor shortage, Border Patrol local officials used military techniques and engaged in a coordinated, tactical operation to remove the immigrants.

In 1953, Carter tried to get the National Guard involved in a Operation Wetback but since the U.S. military is not supposed used to enforce domestic laws, he couldn’t gain authorization to . Instead, in 1954, the government introduced Operation Wetback, Border Patrol resources instead.

‘Ike’ took quick and decisive action. He used 1,075 Border Patrol Agents to seal the border. In doing so, a task our government today deems impossible with a force 10% larger. Once the border was sealed, Eisenhower went about of removing the millions of illegal aliens.