Home Culture Jihad Against Easter: A Group Of Muslim Migrants Throws Stones To The... 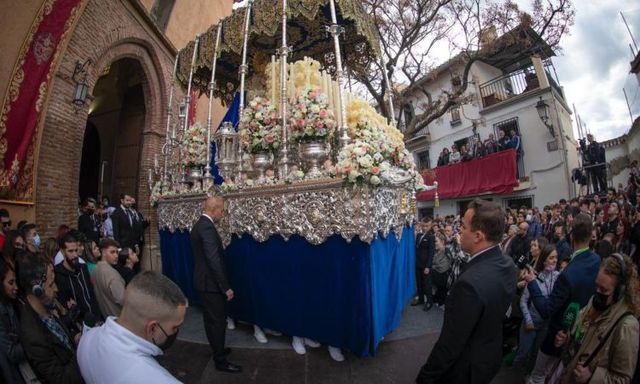 Evicted five centuries ago by crusading Christians, jihadists have historically dreamed of, and worked towards, regaining the “lost Caliphate” of Spain.

Spanish citizens are under constant threat by Islamic migrants who have illegally entered their country. Yet, despite the dangers and instability, the illegals pose to Spaniards, especially Christians, the country’s left-wing government led by Pedro Sánchez has been unwilling to close its borders, properly vet illegals or deport potential terrorists. Therefore, it should come as no surprise that illegal Muslim migrants have attacked Christians during their Holy Week.

A group of Muslim migrants from a local shelter pelted Christians with rocks and projectiles at an Easter procession in Granada, Spain during Holy Week.

This is not the first time this has happened. On Palm Sunday, a group of North Africans had tried to attack the Easter procession in El Vendrell (Tarragona).

A group of unaccompanied minor refugees from the Bermúdez de Castro hostel in Granada disrupted the Catholic procession in the early hours of Holy Thursday morning (…) Fortunately, the quick intervention of the police prevented serious incidents.

Total outrage in Granada. The procession had been on the road for about an hour and a half, and as it went down the Cuesta del Chapiz, a large number of objects began to rain down on those present. All of these projectiles came from the migrant shelter mentioned above, as several sources confirmed.

The president of Vox Granada, Onofre Miralles, condemned the events through his networks: “Yesterday I had the honour of accompanying the procession. I was informed that objects were thrown at the procession from the reception centre for underage migrants. They are directed against our culture and our tradition. I demand action on the part of the Region of Andalusia”.

This is the umpteenth attack on a Catholic procession during Holy Week. It is not the first incident and unfortunately it will not be the last. Last Sunday, a group of North Africans had tried to attack the Easter procession in El Vendrell (Tarragona).

For years, the Islamic State and other jihadists groups have called on Muslims to reconquer al-Andalus, including Osama Bin Laden. Evicted five centuries ago by crusading Christians, jihadists have historically dreamed of, and worked towards, regaining the “lost Caliphate” of Spain. Not only have all the leaders of the global jihad repeatedly threatened they will reclaim the region, but they urge their soldiers hiding in Spain to attack.

Al-Andalus is the Arabic name given to those parts of Spain, Portugal and France occupied by Muslim conquerors (also known as the Moors) from 711 to 1492. Many Muslims believe that territories Muslims lost during the Christian Reconquest of Spain still belong to the realm of Islam. They claim that Islamic law gives them the right to re-establish Muslim rule there.

In Islam, any territory Muslims have conquered is forever considered an Islamic territory. Muslims claim this gives them a legal right to apply whatever means necessary to take their land, should non-muslim locals ever regain control.