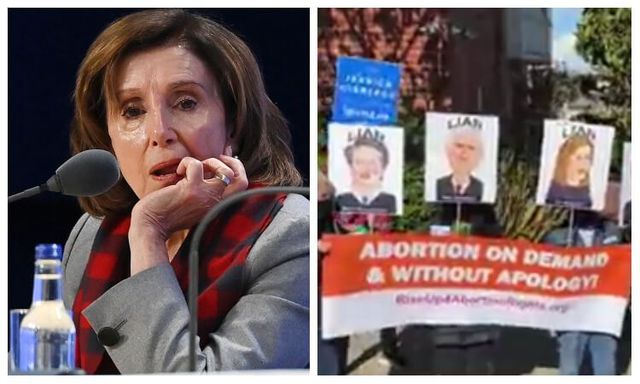 The White House on Tuesday said it encourages “peaceful” protests outside the homes of Supreme Court justices, while criticizing those on the right who have expressed “outrage” over Roe v. Wade demonstrations but were “silent” when protests against school boards, abortion clinics and the capitol riot.

Nancy Pelosi was on the same page and commended those who “channeled their righteous anger” over the Supreme Court’s leaked draft decision that would strike down Roe v. Wade by organizing and marching.

“While we have seen and heard extraordinary anguish in our communities, we have been moved by how so many have channeled their righteous anger into meaningful action: planning to march and mobilize to make their voices heard,” Pelosi wrote in a letter that was addressed to a “Democratic Colleague” and shared on her website.

She also went on live TV and double own her comments:

Meanwhile, far-left groups are currently publishing the private addresses of justices’ homes to encourage protesters to protest there. pic.twitter.com/8LadBrxNqi

Nancy Pelosi has been inciting the people on the left, urging the public to act to “improve the decision” after the draft SCOTUS opinion was leaked. There’s no way to get around that she incited people to break the law to change the decision.

Nancy Pelosi says “the focus we have right now is an urgent one in order to try to improve” the Supreme Court’s forthcoming decision in Roe v. Wade. pic.twitter.com/MfPnhFcFBt

However, Pelosi finally got some brutal dose of karma from the Americans she encouraged to protest and harass the Supreme Court justices.

The leftists who were targeting the justices’ homes are now targeting Nancy Pelosi.

Multiple groups–including the group that named themselves “Ruth Sent Us”–said that they would be going to Nancy Pelosi’s San Francisco home on Tuesday evening to demand that she “investigate the corrupt justices” and “save abortion.” Their remarks are full of nutty conspiracy theory defamation, but this is where the left is at now.

“We will be marching to the front door of [Pelosi’s] Pac Heights mansion to demand: #SaveAbortionNancy #DefendRoe!,” Ruth Sent Us tweeted. [….]

“We have had careless and cowardly representation by [Pelosi],” the group wrote. “The GOP followed a scorched earth strategy with endless Benghazi hearings and ACA repeals, but she passed endless bills that lay on [Senate Minority Leader Mitch McConnell’s] desk and refused to hold hearings on TRUMPIAN crimes.”

“When nauseating [Supreme Court Justice Brett] Kavanaugh was nominated in 2018, Dems knew he was a Bush campaign operative who had perjured himself in previous confirmation hearings,” it continued. “He was also a known alcoholic and gambler. Then his serial sexual assaults came to light. He was still seated on SCOTUS.”

“Through Herculean efforts of grassroots volunteers, [Pelosi] was reinstated in 2019,” it added. “She held ZERO hearings into Kavanaugh’s crimes and perjury. Imagine if she had. Would this creep be on the Court, daring to overturn Roe?”