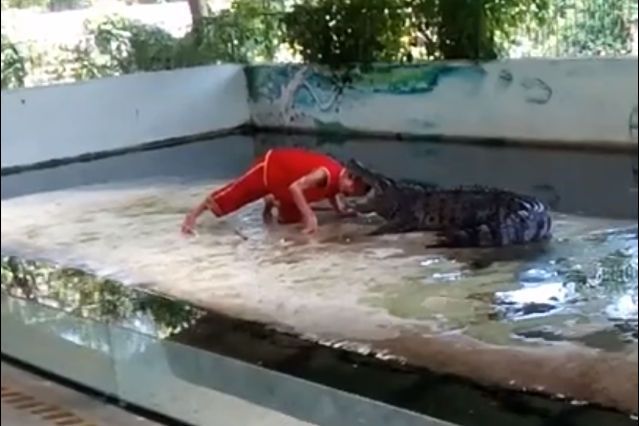 Playing with crocodiles may sound fun and exciting, but even the professionals can have their horrible experiences that could cripple them for a lifetime.

I’m not sure why anyone would want to stick their head in a crocodile’s mouth because I can think of a lot of other jobs that most likely pay better.

Well anyway, there is this zookeeper in Tialand that must be a few bricks short of a load because he loves sticking his head in a crocodile’s mouth while people gawk at him in amazement.

The day this video footage was taken, his crocodile must have been extra hungry. They must not have fed the croc enough dogs that day (or whatever it is they feed it.)

Scroll down to watch the video below.

The video was filmed last Sunday showing a man performing at one of Thailand’s famed crocodile shows for a small group of people on the tourist island of Ko Samui.

In the video, the zookeeper kneels before a crocodile which is lying in wait with its jaw wide open.

The crocodile remains perfectly still as the zookeeper performs his routine with two wooden sticks for the audience.

During the routine he waves the stick around the crocodile’s open mouth and momentarily pokes it inside.

The daredevil decides to raise the stakes by placing the sticks to one side and shoving his entire head inside the motionless crocodile’s mouth.

He holds his position for ten seconds before the crocodile suddenly snaps down on his head and violently thrashes him around.

The man lets out a horrifying scream as the audience watches in shock.

He is left on the ground reeling from his injuries as the crocodile slides back into the water.