Home Culture Man Who Was Working On A Car That Runs On Water Was... 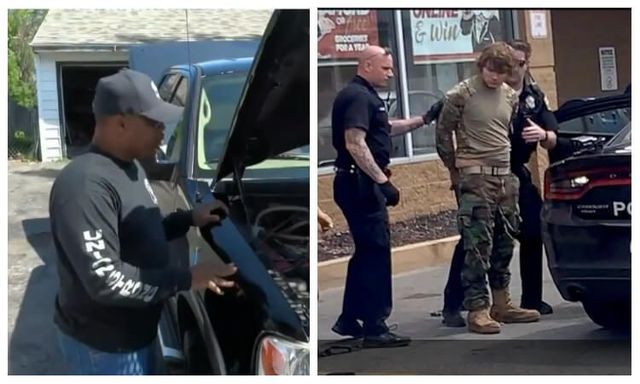 A retired Buffalo police officer who was working security at the supermarket where a gunman opened fire Saturday is being hailed as a hero for confronting and firing upon the suspect before being fatally shot.

Aaron Salter Jr. was among the 10 people killed in the attack.
Salter was a retired Buffalo police officer who was working at Tops as a security guard.

Officials say the 55-year-old security guard fired his gun multiple times at the attacker and struck his body armour at least once. The gunman was unharmed and returned fire, killing Salter, according to police.

“He’s a true hero,” Buffalo Police Commissioner Joseph Gramaglia said Sunday. “There could have been more victims if not for his actions.”

Salter “gave his life trying to save others,” Biden said.

But what everyone failed to mention is the fact that he was close to making a complete working engine that runs on water.

A video from a local station even shows the hero as he presents his prototype for an engine that runs on water.

He fancied himself an inventor and, inspired by rising gas prices, was working on prototypes to develop a process to fuel cars with water, called hydrogen-electrolysis.

Salter is also listed as an educator with Buffalo Public Schools from 2008 to 2011, where he worked as a substitute teacher.

But it appears his true passion was as an amateur scientist and inventor. He spent years working on a car engine that could run on water in an effort to limit gasoline use, splitting the molecules with electricity to isolate hydrogen for energy.

“He was very passionate about this,” Steven Malkowski, a friend and retired Buffalo police officer who served as Salter’s supervisor, told the Buffalo News.

“He was trying to contact people who could help him with production on this. I’m not a mechanical guy, but he had it all laid out.

He said he was hoping to partner with a company that could make his water-powered engine a reality for vehicles, generators and even boats and motorhomes.

“I’m a Buffalo police officer and I make a nice salary, but there’s no way I can push forward a whole industry on this salary,” he said.