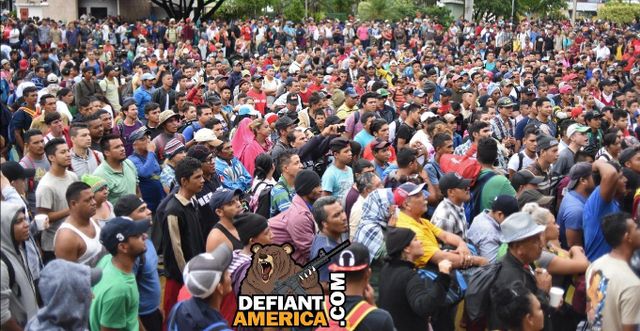 A group of about one thousand migrants from Central America were able to get through the border that separates Guatemala and Mexico.

Mexican authorities stood down on Friday and did not confront the group that is part of a larger caravan of migrants who intend on coming into the United States.

The gates at the border were temporarily left open for migrants who crossed the bridge from Tecun-Uman to Ciudad Hidalgo.

The migrants found no locks on the border gates and they freely entered Mexico without showing identification or registering with immigration officials.

Now the caravan will march or get rides and travel to the U.S. border which can be between 1,000 to 2,500 miles depending on the point of entry.

A Mexican official said to reporters that that they “did not want to confront” the migrant caravan. They feared the incident that arose last year when violent clashes between police and the migrants broke out.

Still no one is telling if the border gates were left open or if migrants broke the locks.

The crossing over the Mexico border was not at all like what happened last year when migrants were pushing through the closed gates with authorities and riot police spraying pepper spray.

It was expected that Mexican authorities would force migrants to wait five days for their paperwork to be processed before letting them enter the country.

President Trump is standing strong on the need for a border barrier or wall during the partial government shutdown.

On the other side of the coin, Congressional Democrats are not budging on withholding funds.

Another big Caravan heading our way. Very hard to stop without a Wall!

Never seen the Republican Party so unified. No “Cave” on the issue of Border and National Security. A beautiful thing to see, especially when you hear the new rhetoric spewing from the mouths of the Democrats who talk Open Border, High Taxes and Crime. Stop Criminals & Drugs now!

Some caravan members have said that they won’t be following the new procedures. They claim that they don’t trust the government. They say they may even cross the border without waiting.

That tells me that migrants have no regard to obey laws and come into the U.S. legally. They are essentially planning an invasion into the U.S.

Andres Manuel Lopez Obrador was sworn in as the new Mexican president since the last crossing of migrants. He is in favor of a more humane solution to the migrant caravan, including a jobs program for the migrants. This would, in fact, be an effort to stop the flow of migrants towards the U.S.

Lopez Obrador is asking Trump to put in money to improve economic conditions in the region in exchange for this.

In the meantime, Guatemalan Officials estimated the caravan at 1,800 people. Besides this, another two caravans are on their way.

The problems associated with the caravan could be settled quickly if the Democrats were open enough to look at the crisis that is getting worse on our southern border.