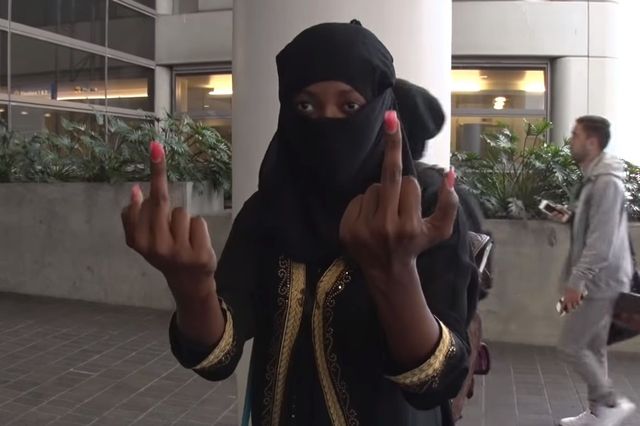 If you have any friends who don’t think the radical ideology of Islam is an eminent danger to our society, please SHARE this article with them.

In the video below, the Muslim woman begins her rant by telling the cameraman “Fu*k America” and then warns that she will make sure America is bombed.

Later, she tells the cameraman, he is nothing, and all Americans will pay because they know Islam exists but do not accept it.

These kinds of rants are not to be taken lightly, she is a danger to society.

Again, President Trump is 100% right in his attempt to prevent radical Islamist from infiltrating our country to protect us.

Watch her violent rant in the video below.

If Islam is such a great cultural, religious and political system, then why does it have to force itself on other nations? Why are millions of people who live in a free society all over the world not falling to their knees to accept it?

As it has been for the past 1400 years or so, Freedom Loving nations will continue to expose & defeat Islam at every turn.

With our last breath, we will fight the Evil of Islam until its vile form of forcing submission by violence is eradicated from the face of the earth!

Watch the full video below.