Home Culture Watch: Muslim Women Give Instructions on How Muslim Men Should Beat Their... 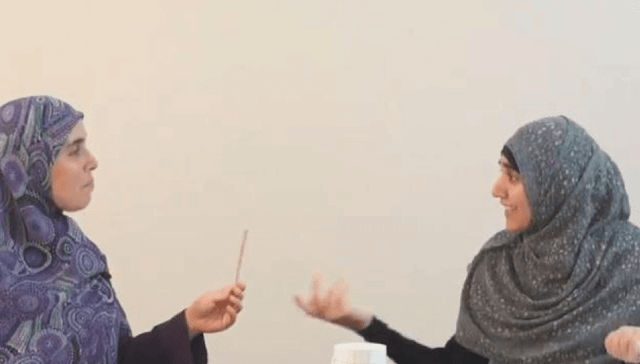 We now how an instructional video handed down from Allah that teaches Muslim men how to beat their wives.

To top that off, the video is of 2 Muslim women presenting the instructions.

The video is from Australia where it is illegal to strike women.

Needless to say, this is not going over so well on the Internet.

A video posted by an Islamist group in Australia says men should beat their wives – and women should accept being hit as a ‘beautiful blessing’.

The appalling lecture by the Women of Hizb ut-Tahrir group says that God made men superior to women. It’s drawn condemnation from political leaders and welfare groups but police are powerless to act.

The video, posted on Facebook begins with two women introducing themselves.

“My name is Reema Allouche and I have with me sister Atika Latifi… Alaykum salaam.”

The half hour discussion then goes on to explain how men have the “obligation” to provide for their family and married women must “submit and obey” their husband. The pair also outline how a man could “discipline” his wife.

The pair then jokingly demonstrate hitting with a small stick and a handkerchief.

The video has drawn condemnation from political leaders and welfare groups.

“On behalf of the Turnbull government I absolutely condemn the statements made and the video that is being made by these women, it is absolutely abhorrent,” said Michaelia Cash, the Federal Minister for Women.

“We have one law in Australia and that law prohibits violence against women,” Cash said.

“I am absolutely appalled that there are particular women out there who are saying that it is alright for a man to hit a woman.”

“Domestic violence is always illegal under Australian law and no Australian group should be encouraging Australians to break Australian law,” said Tanya Plibersek, the Shadow Minister for Women.

Peterson Opio from the White Ribbon Foundation said the video was disturbing given, on average, one woman a week is killed at the hands of an intimate or former partner in their relationship in Australia.

“This video online is totally unacceptable as it flies in the face of the fundamental right for all women to live free from all forms of men’s violence and abuse,” Mr Opio said.

Hizb ut-Tahrir Australia have in the past called for the “destruction of Jews” and the “overthrow of democracy” – replaced with a Caliphate under Sharia Law.

Last week they confirmed their belief that Muslims who leave Islam should be executed – prompting an investigation by Australian Federal Police, which is ongoing.

Given the extraordinary nature of this video Seven News asked Hizb ut-Tahrir (HBT) and the women’s group if it is a hoax – they did not respond.

“If she is not repentant, he should beat her, but there are rules to the beating. There is a beating etiquette. If he beats to discipline her, he must not raise his hand high, he must beat her from chest level,” explained a Sheikh interviewed on Arabic TV.

“This is absolutely intolerable, there is no way this group should be promoting the idea that men should be able to beat women,” said Alison Bevege, a freelance journalist who last year successfully sued Hizb ut-Tahrir for gender discrimination after they made her sit at the back of a public rally.

NSW Police say they despite promoting domestic violence, the video does not break any law and no charges can be laid.

Seven News has learned Reema Allouche is registered as a teacher but there is no record of her ever working in a school in NSW.

Watch the horrible video below.