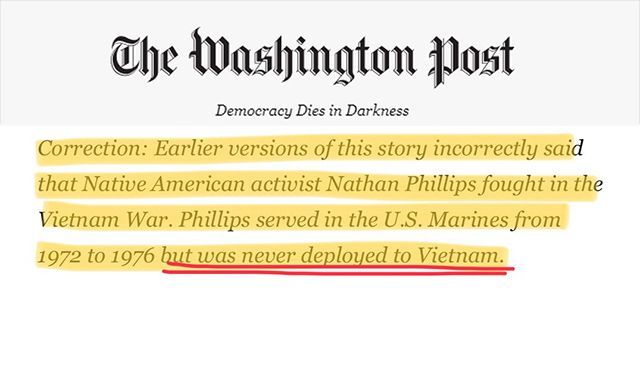 The Washington Post quietly issued a bombshell correction Tuesday morning stating Native American activist Nathan Phillips never fought in Vietnam and was not a “Vietnam veteran” as they and tons of other publications claimed.

The correction is buried at the bottom of this article titled, “‘It was getting ugly’: Native American drummer speaks on his encounter with MAGA-hat-wearing teens.”

Correction: Earlier versions of this story incorrectly said that Native American activist Nathan Phillips fought in the Vietnam War. Phillips served in the U.S. Marines from 1972 to 1976 but was never deployed to Vietnam. 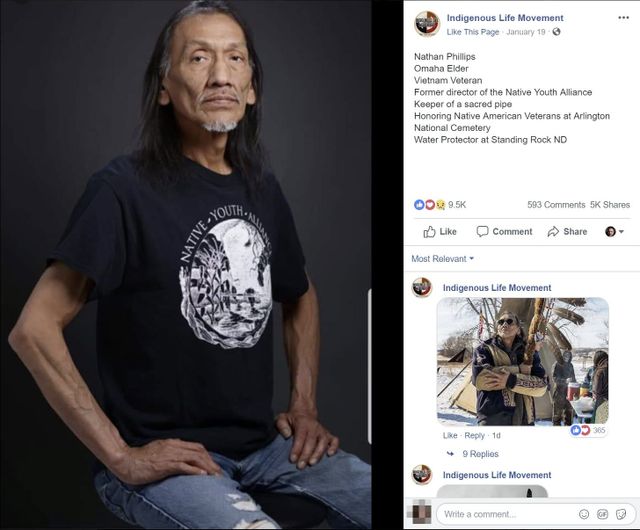 The Gateway Pundit reports Phillips raised money off of the claim he was a Vietnam vet:

In 2012, over $6,000 was raised for a documentary about his life in which he claimed to be a Vietnam veteran.

In a video about the documentary, director Maria Stanisheva explained that her documentary was about Phillips’ belief that he could pray cancer away from his wife.

Stanisheva explained in the footage that Phillips had been sent to a Catholic boarding school at the age of five. From the sound of it, he resents the experience.

“Nathan’s past is a difficult one. He was forced out of his family at the age of five to be integrated into a Catholic school — like so many other Native Americans — not being allowed to see his family for ten years,” Stanisheva stated.

Stanisheva goes on to say that “he was then a Marine in Vietnam — and right after that he became an alcoholic for 20 years.”

Indian Country Today writer Vincent Schilling, who says he is the “journalist that broke the initial story on Nathan Phillips and the MAGA youth,” carried this shocking quote in his initial report on January 19th (which he has since stealth edited):

In a previous interview with Phillips, he told Indian Country Today that returning from Vietnam was not easy as a veteran. “People called me a baby killer and a hippie girl spit on me.”

He recently stealth-edited the article to now read:

In a previous interview with Phillips, he told Indian Country Today that the Vietnam era was not easy as a marine. “People called me a baby killer and a hippie girl spit on me.”

Are you going to explain how your story changed? You said he was a “Vietnam veteran,” now you say he’s a “Vietnam-era veteran.”

Did he tell you he was a Vietnam veteran or not? https://t.co/lT0CDmFVUO pic.twitter.com/lrFibY6uJw

He has yet to respond.

In 2012, over $6,000 was raised for a documentary about his life in which he claimed to be a Vietnam veteran.

Phillips also described coming back to the U.S. as a veteran from Vietnam. “People called me a baby killer and a hippie girl spit on me.”

Phillips also described coming back to the U.S. as a veteran of the Vietnam era. “People called me a baby killer and a hippie girl spit on me.”

Asked Monday why he changed his 2008 story on Phillips, Schilling responded saying he “misunderstood the situation”:

Yes absolutely I did edit it to reflect the fact that when I wrote this article ten years ago, I misunderstood the situation in which he was spit on.

I changed it after receiving an email alerting me – this is why the article reflects “edited” I am not trying to hide this fact.

Schilling added the following note to the bottom of the article from 2008:

Note: This article has been adjusted from it’s original version to show that Nathan Phillips was a Vietnam-era veteran and that he was spit on while in uniform as opposed to when he was returning from combat.

Regardless, it’s absolutely clear Phillips has made little to no effort to correct the widely made, false claim he was a “Vietnam veteran.”

The media has instead been eager to push the false claim he fought in the war.

Lies from a friend of Nathan Phillips at Vogue: pic.twitter.com/Kw7orVLOaT

UPDATE II: Video of Phillips saying he was a “Vietnam times veteran” who got “spit on” and called a “baby killer” has emerged:

#NathanPhillips didn’t serve in Vietnam
But talks like he did

He says he’s a “Vietnam times veteran” & “When I come home, those times, I got spit on & called a baby killer”
Come home?
&
He has never corrected any story calling him a Vietnam vet pic.twitter.com/7E48asmf0s