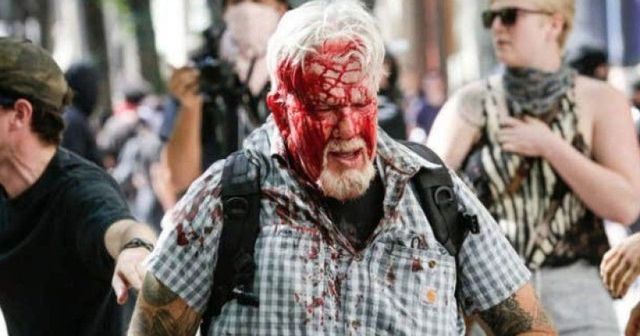 Journalist Andy Ngo, who covers Antifa activity, was attacked at a Portland rally Saturday and has reportedly been admitted to the hospital.

Masked individuals attacked Ngo at a rally in Oregon, throwing what appeared to be milkshakes at him and punching him, according to footage of the attack.

Now we have a new video from Saturday’s rally in Portland shows Antifa criminals making an elderly man in the face while attacking another man with a crowbar.

The vicious assault was even more brutal than that sustained by Andy Ngo, who was doused with quick drying cement hidden in milkshakes.

One of the victims, identified by commentator and journalist Michelle Malkin as John Blum, suffered a bloodied face after he was beaten with a crowbar. The other man, identified as Adam Kelly, had his head split open by criminal Antifa members, suffering a concussion; he needed 25 stitches.


I back the police, but to see this happen I don’t know why those officers are not protecting the people’s they have sworn to protect. It’s a shame they had taken an oath, but yet they just stand by and watch, I hope they will think and get together and arrest the mayor and his people’s and charge them with causing the innocent being harassed.