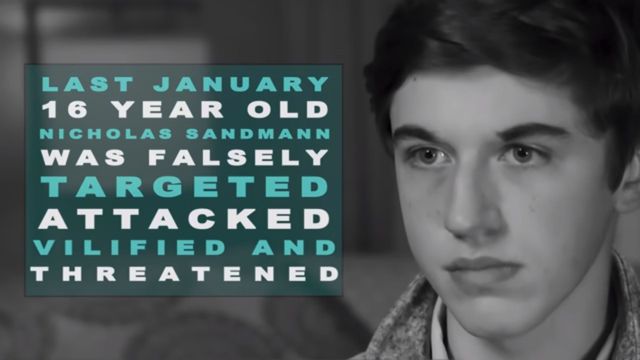 Nicholas Sandmann’s legal team is going all out in a complete exposure and major lawsuit against the Washington Post and CNN for giving a platform to lying Nathan Phillips and bolstering his false narrative to push their socialist & political agendas.

Nicholas Sandmann was the victim of their vicious smear campaign based on a short video clip and a false narrative describing things that happened and were said that were nowhere to be seen or hear on the clips.

Once additional video became available, it was clear that the claims against Nicholas and his friends was pure concocted fantasy. A fantasy that was easy to sell to media outlets that were looking to report President Trump and his supporters in the most negative ways possible. The truth was of no interest to them.

The lies were quickly exposed and the fake news media along with the unhinged leftist mob on twitter excitement and hate was quickly extinguished, but Nicholas was left with his honor and reputation shattered.

Nicholas’ family stepped up and filed defamation lawsuits against The Washington Post ($250 million) and CNN ($275 million). Lawsuits against other media outlets, public figures and celebrities are expected follow.

However, this is not quit enough, so Nicholas’ legal team released a video to inform and educate the public as to the true events that took place and what Nathan Phillips, CNN and the Washington Post did to him.


The only thing that these big media corporations understand is money and the only way to hurt them is to extract it from their wallets!

The Washington Post, owned by the riches man in the world, led the print media’s false attacks on Nicholas’ reputation. CNN lead the broadcast charge against Nicholas.

Both recklessly spread lies about a minor to advance their own financial and political agendas.

Despite raw video debunking the narrative, the Post and CNN doubled down on their reckless LIES. Lies that will forever haunt and endanger the life of an innocent young man. Lies that further divided our nation.

How long will we allow these Media Giants to tear at the fabric of our lives to further their own agendas? Will they ever be held accountable? YES they will!

Nicholas Sandmann has taken a stand for himself and for you. By filing major lawsuits against CNN and the Washington Post.

Nicholas and his legal team will not be stopped until these Goliath Corporations are held accountable for their lack of journalistic integrity.

Until then, no one’s reputation is safe.

Lin Wood: “If you took the time to look at the full context of what happened that day. Nicholas Sandmann did absolutely nothing wrong. If they can get away with this against a 16 year old boy. Then we’re all at risk. There has to be change.”

If you’re done with the dishonest and decisive media. Please like and share this video far and wide.