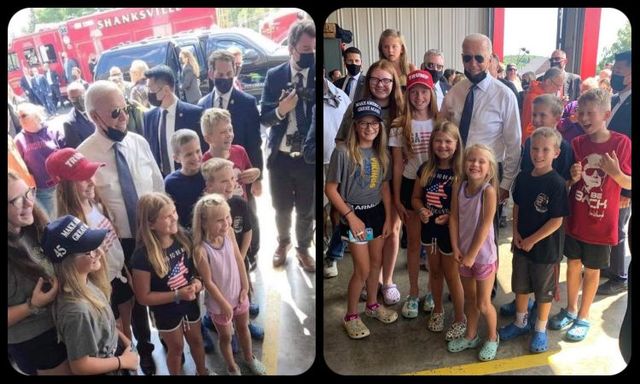 A group of very young Trump supporters hilariously trolled Joe Biden in Shanksville, PA over the weekend – much to the horror of Biden’s handlers.

Joe posed with the children for a photo, blissfully unaware that the kids were all decked out in pro-Trump gear.

NBC News reported that after attending a memorial event at ground zero, Biden visited the Flight 93 memorial in Shanksville. Apart from being part of the wreath-laying ceremony, the U.S. President also visited the local fire department.

It was there when a bunch of kids approached Biden and the U.S. President was pictured surrounded by them. Soon after the images surfaced on social media, eagle-eyed users spotted few kids wearing T-shirts and caps supporting Donald Trump.

One of the boys standing on the left side of Biden was wearing a red T-shirt with face of the former president printed on it. “Be Back” was written below the image.

Another girl was seen wearing a red-colored hat with Trump written boldly written on it. Another was spotted wearing a hat with ‘Make America Great Again’ stamped on the front and ’45’ on its side.

In the photo, you can see the children smiling widely, with some of them bursting with laughter at Joe’s complete lack of awareness. 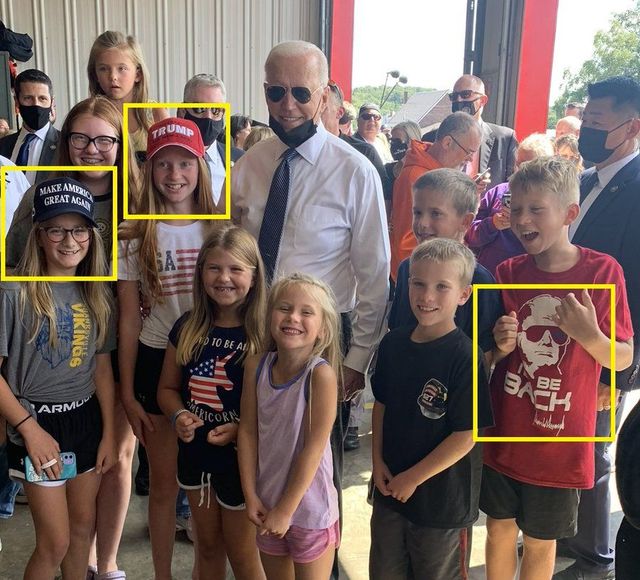 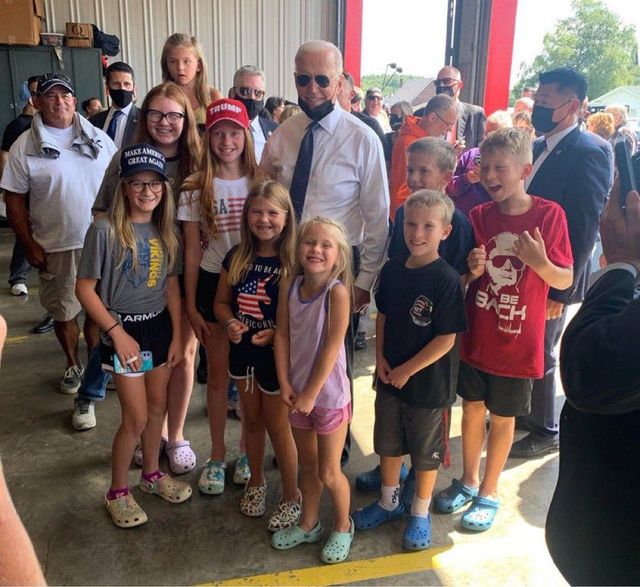 Here’s what some people said about the photo online:

“Holy c**p, these little shits are the best trolls”

“They all have “shit-eating” grins”

“Is it sad that I was just looking for his hand to be inappropriately placed on a child?”

“Yeah, I was expecting to be angered by creepy, inappropriate touching. Didn’t even notice the other stuff.”

“Joe had no clue. the guy doesn’t even know what his wife looks like”

“great troll kids, you did us all proud”

I’ll tell you what, those kids have some amazing parents, that’s for sure.

But unlike Biden Trump haven’t got any problem while visiting the firefighters or the police officers sin NY!

As soon as Biden left NY on 9/11 Trump arrived to honor the victims of the greatest terrorist attack on our country!

First, he was greeted by the NY firefighters after his surprise visit!

He also made a surprise visit to the NYPD and FDNY on the 20th Anniversary of 9/11 and made a statement in support of the police officers.

BREAKING: President Trump just made a surprise visit to the NYPD and FDNY on the 20th Anniversary of 9/11

“We’re not supposed to say it, but I’ll say it. We love the Blue.” pic.twitter.com/1aSAvkEpZe