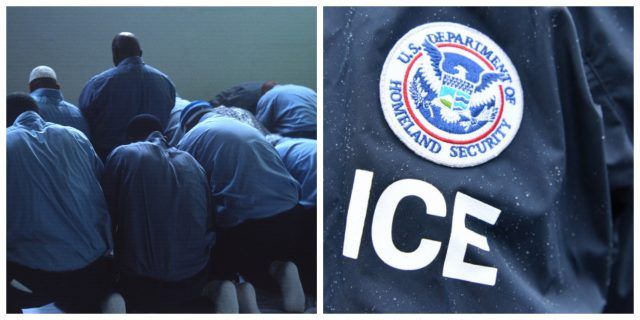 There are many liberals around that are protesting the ongoing ICE raids.

Some of them burn the American flag, some of them dump gallons of fake blood on ICE buildings and some of them are teaching their children to hate ICE agents.

They teach their children to punch Piñata that looks like ICE agent.

But the pressure on ICE is set to be even bigger now.

ICE is set to be sued by 5 Muslim immigrants for rejecting religious accommodations.

When Muslim immigrants detained at Glades County Detention Center in Moore Haven came together with a set of demands concerning their religion, they believed that authorities would understand that the aspects are compulsory and not optional. That’s why they were shocked and outraged when they received an unexpected response.

According to The Intercept, five Muslim immigrants at the Glades County Detention Center were incensed when U.S. Immigration and Customs Enforcement issued a simple denial of their list of religious demands while in custody. Their requests included free halal meals, free prayer rugs, free Qurans, access to prayer rooms 5 times per day, access to foot-washing facilities, and special accommodation for meals after dining hours to coincide with their monthly fasts.

Now, they’re suing. On Wednesday, the men, all of whom came to the United States as refugees from Somalia, sued the Glades County sheriff and other county employees, as well as U.S. Immigration and Customs Enforcement for denying their ability to freely practice their faith, in violation of the U.S. Constitution and federal and state law.

The lawsuit, which has not been previously reported, was brought by Muslim Advocates, a national civil rights group, and Americans for Immigrant Justice, a Florida-based immigrant rights group.

“Glades County Detention Center for more than a year has been preventing Somali Muslim men from practicing their faith in various ways,” said Yusuf Saei, a fellow at Muslim Advocates. “ICE doesn’t seem to care about it and is knowingly allowing it to occur.”

The groups brought this lawsuit to vindicate their clients’ rights, Saei said. “We want to ensure that, going forward, Glades is going to treat Muslim detainees and detainees of all faiths respectfully,” he said. “It’s important to us that ICE take the protection of immigration detainees seriously and that it actually enforce its detention standards.”

What do you think about this lawsuit?