Home Culture Security Guard Shoots Dead A Man In Front Of His Wife During... 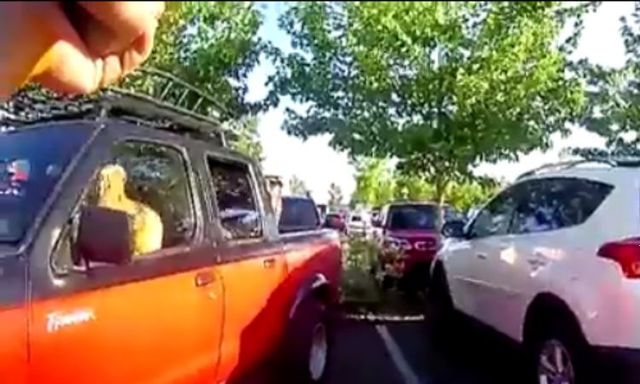 A Multnomah County Grand Jury has indicted security guard Logan Gimbel for fatally shooting a man in a North Portland parking lot in May.

The shooting took place on the night of May 29 at the Delta Park Center shopping plaza. Gimbel shot Freddy Nelson, 49, through the windshield of Nelson’s Nissan Frontier as Nelson sat in the plaza’s parking lot.

The bodycam footage that surfaced yesterday however sparked a lot of controversies as well as debates about whether the man should receive such a harsh penalty!

Footage from private guard Logan Gimbel’s body camera reveals for the first time how the 60-second encounter transformed from argument to homicide — the apparent result of acrimony and distrust built up over months of conflict between Cornerstone Security Group officers and a man collecting wooden pallets to resell.
In the body camera footage from a Lowe’s parking lot, Gimbel could be heard repeatedly telling Nelson to leave the property.

When Freddy Nelson and his wife Kari Nelson did not leave, Gimbel sprayed pepper spray into the vehicle. Kari Nelson began screaming at Gimbel and hurling expletives at him.

“He’s using a level of force not commensurate with the issue, and he’s using tactics that are completely not congruent with the outcome that he wants,” Holman said. “This is a list of what not to do.”

“Mr. Nelson tried to kill him, or seriously injure him, by use of his vehicle,” Gutbezahl said. “If this isn’t self-defense, we might as well get self-defense taken off the books.”

Cornerstone Security Group issued a trespassing order against Freddy Nelson in April 2021, the Oregonian reported. Nelson had argued he was never told why he was banned from the property.

Social media users have been split in their assessments of the incident.

The Multnomah County District Attorney’s has expressed concern over the policing power the underregulated industry has been given.

“Concerns regarding the role of private security, particularly when they are armed, have been a topic of local and national discussion in recent years,” the statement from the DA’s office read. “While armed private security guards can encounter situations where the use of deadly force may be considered lawful, most do not receive the tactical and de-escalation training which is expected of sworn law enforcement”