Home Opinion The Latest Video From The NATO Summit Shows What Happens When A... 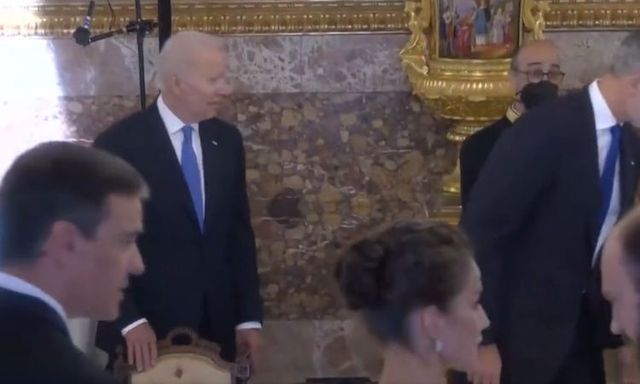 President Biden on Tuesday said the Pentagon will send additional Navy destroyers to Spain as part of U.S. efforts bolster NATO defenses in the face of Russian aggression in Ukraine.

In talks with Spanish Prime Minister Pedro Sánchez, Biden promised to increase the number of Navy destroyers stationed at Rota Naval Station in Spain from four to six.

“As I said before the war started, if Putin attacked Ukraine, the United States would enhance our force posture in Europe and respond to the reality of a new European security environment,” he said alongside Sánchez after the two met.

“Together, the new commitments will constitute an impressive display of allied unity and resolve and NATO’s 360-degree approach to our security.”

Biden, who is in Madrid as part of a three-day NATO summit, said the additional destroyers are just one of several announcements that he and allies would make during the gathering.

He did that all with the help of his staffer’s note cards and his teleprompters!

However, the latest video that arrived from Spain shows Biden who looks lost and can’t find the place where he needs to seat!

This was a pretty awkward situation and it seems that Biden’s handlers forgot to give Biden his notecard!

Biden has been in the wrong seat, the guy next time to him seemed to motion to someone else and then over to that seat, but Joe was hovering over it.

Allegedly he had trouble finding his seat for the next 2-3 minutes but one of the handlers took Biden to his chair!

👀 White House instructions to Biden: "YOU take YOUR seat." pic.twitter.com/PyqN0zW3n8

Where in the hell is the Easter Bunny when you need him? pic.twitter.com/Q2a2bB122Y

Biden probably pooped 💩in his pants and felt uncomfortable sitting down.

He sincerely looks lost and a bit scared. Shame on his family for allowing this.