The fire at Notre Dame began April 15, 2019, around 6:30 p.m. local time, which is around the time the cathedral closes to the public for the day. It quickly engulfed the building and sent huge billows of smoke shooting into the sky. An estimated 400 firefighters struggled to contain the flames, which raged for more than three hours.

We all thought that everything that was inside is either damaged or destroyed, but god works in mysterious ways!

An aerial shot of the historic cathedral showed widespread damage to the roof, however, a photo of the interior of the church revealed that a Cross was still intact and standing – a miracle!

Video of the Cross miraculously standing in the ruins as firefighters enter the cathedral:

Powerful footage from Paris. Amidst the flames, ash, and rubble, the altar and cross clearly remain intact at Notre-Dame Cathedral. Truly a symbol of hope, purpose, and love during Holy Week as we prepare to celebrate Easter around the world. pic.twitter.com/JHCOh2u7qU

Notre Dame’s most precious treasure, a relic venerated as the Crown of Thorns worn by Jesus Christ, is feared to have been badly damaged in the fire.

The Crown of Thorns, which is considered Paris’s equivalent of the Crown Jewels, is stored at the end of a nave of the cathedral, not readily visible to visitors.

It is encased in an ornate gold and glass container commissioned by Napoleon and is only brought out on Fridays during Lent and on Good Friday.

While the authenticity of the relic has not been certified, historians have dated it back to Jesus’ crucifixion.

The relic originally came from Jerusalem and was carefully placed in the nearby Sainte-Chappelle, a chapel built in the 13th century specifically for the crown.

There have been other inspiring sights on the streets of Paris tonight, including the moment a group of bystanders broke out in song and prayer.

The amazing thing, as awful as today has been, it has drawn out the faithful. 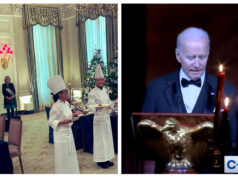