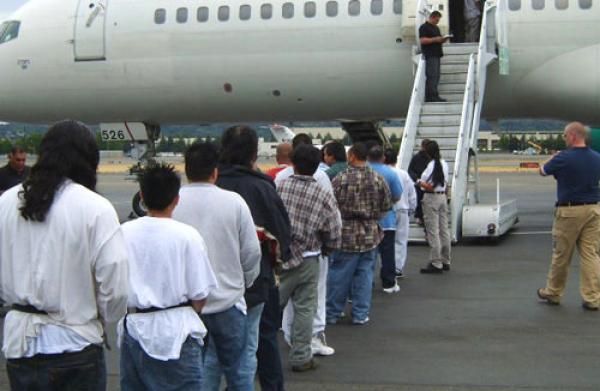 A new report says. the Transportation Security Administration (TSA) has been allowing illegal immigrants to fly without providing any forms of identification.

Since December 2018, TSA has permitted illegal immigrants released from custody to board domestic flights without having any of 15 forms of identification typically required for airline travel, the Washington Examiner reported exclusively on Thursday.

A TSA spokesperson told the Washington Examiner that illegal immigrants could fly without identification as long as they provided Department of Homeland Security (DHS) Form I-862, the “Notice to Appear” form that is provided to immigrants who have applied for asylum, passed a credible fear assessment, and could wait up to five years for a federal judge to decide their case.

The form can serve as identification because it is only issued after a background check has been conducted on the applicant while in federal custody, the spokesperson noted.

The TSA’s website lists 15 forms of identification acceptable to travel, which are:

A U.S. Citizenship and Immigration Services (USCIS) official told the Washington Examiner that Form I-862’s sole purpose is to tell applicants when to appear in court, and it cannot authorize applicants to travel.

“TSA accepts identification documentation issued by other government agencies, which is validated through the issuing agency. All passengers are then subject to appropriate screening measures,” the TSA said in a statement to Washington Examiner.

“Late last week, we were told by border patrol agents in Laredo, Texas that they had observed TSA accepting I-862 notice to appear in court documents from illegal aliens who had just been released from border patrol custody, and allowing them to fly,” said Shawn Moran, vice president of the National Border Patrol Council. “A couple of days ago, we found out the same type of situation was occurring in El Paso, Texas at their airport. We did receive reports that in El Paso, illegal aliens were walked around security, much to the dismay of U.S. citizens who were standing in line waiting to be screened.”

“These documents are easily reproduced on any type of copier or home computer, they have no photographs, so there’s really no way to verify that the person holding them is actually who they say they are,” he said. “We’re just concerned that the commercial transportation system could be exploited by somebody claiming to be another person.”

Our southern border is now a magnet for illegal immigration from all over the world. It’s time for Democrats to help close the loopholes!

They also posted a video of illegals from Africa that are crossing the Rio Grande river!

Our southern border is now a magnet for illegal immigration from all over the world. It’s time for Democrats to help close the loopholes! pic.twitter.com/lxe7qqQiNj

In another video posted by US Customs and Border Protection where men, women and children crossing the river in the dead of the night.

Border Patrol announced they apprehended 116 invaders from Africa on Thursday.

I have to ask how is an illegal from Angola with zero $$ crossing the Mexican US border?