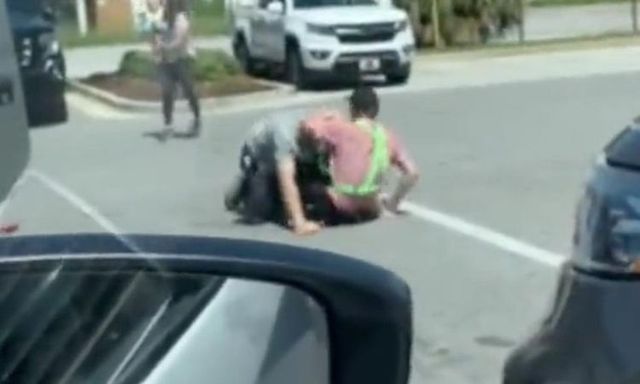 A Chick-Fil-A employee is being hailed as a hero after tackling a reported carjacker at the popular spot in Fort Walton Beach.

In the video you can see the employee jump on the alleged carjacker and apprehend him.

Deputies said Branch grabbed the keys from a woman with a baby outside of a Chick-Fil-A on Beal Parkway and got into her car.

Officials said the employee got involved when he heard the woman screaming. According to OCSO Branch was wielding a stick.

Branch allegedly punched the worker in the face, but that didn’t stop him.

A dramatic video from the scene shows the employee and Branch rolling on the pavement of the parking lot while the woman holding her baby screams for someone to help.

The Chick-fil-A worker pushed Branch to the ground and gets him in a headlock as his coworkers rush over to help hold him down.

Branch can then be seen sitting on the pavement while the employee holds down on his shoulder to keep him down.

Branch is being charged with carjacking with a weapon and battery.

The office thanked the employee for his bravery.

“A major shout-out to this young man for his courage!” it wrote on Facebook.