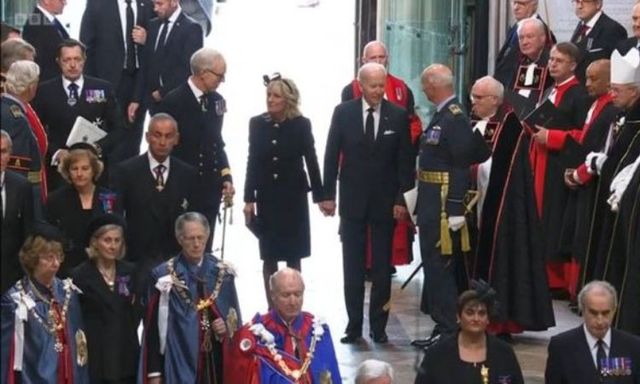 US President Joe Biden has paid his respects to the late Queen at Westminster Hall today before recalling how the late monarch reminded him of his own mother.

President Biden and First Lady Jill were seen standing on a VIP balcony looking down at the Queen’s coffin this afternoon which is under constant guard and draped in flags.

The president touched his hand to his heart and appeared to snap off a quick salute to the late monarch in a gesture of respect, before continuing on through the hall.

He later traveled to Lancaster House where he signed the book of condolence and told reporters that he would remember how the Queen treated everyone with ‘dignity’ and her 70 years of service.

However, Joe and Jill broke a major royal protocol when they first entered the church!

People reacted to the huge disrespect made by FLOTUS and POTUS:

What the heck is on her head? And she has to hold on to him or he’ll wander off. So embarrassing.

Holding hand inside a church!!!Protocol forgot to tell them again!

Oh no they are holding hands 😩

“What the Hell do you think you’re doing?!” pic.twitter.com/ALloG8Tf5k

As a reminder, another American broke this protocol already!

Prince William and Kate Middleton, now known as the Prince and Princess of Wales, met crowds at Windsor (joined by Prince Harry and Meghan Markle, the Duke and Duchess of Sussex) over the weekend, and in Sandringham this week.

While Harry and Meghan walked hand in hand and were seen leaning on each other for support, Kate and Wills maintained their distance and walked apart as they greeted the crowds. No, it has nothing to do with the couple’s relationship. It boils down to professionalism and royal protocol. As per the Palace’s code of etiquette, the future King and Queen Consort are meant to refrain from public displays of affection.

The Bidens, however, were late for the funeral and many saw their actions as disrespectful.