Home Opinion Video: Joe Biden’s Walk is Getting Stranger, What’s With His Leg? 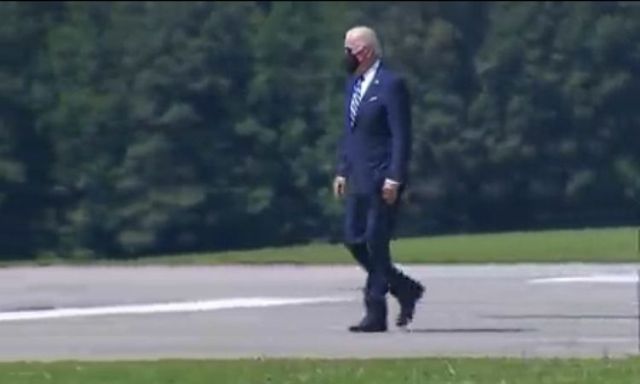 Who is really in charge?

Joe Biden on Friday ‘dropped by’ a meeting with state and local officials on Women’s Equality Day to discuss ‘abortion access’ for women following the Supreme Court’s decision to overturn Roe v Wade.

Then he dropped this gem as he called on a reporter…

“I’m sorry, I took control. I shouldn’t do that. I’m not allowed to do that,” said Biden as his handlers kicked out the press.

Biden stared blankly as his staffers booted out the press.

"I took control. I shouldn't do that. I'm not allowed to do that," Biden says before his handlers kick out the press. pic.twitter.com/kfiha6HN3G

The Handlers love to try to make Bumbling Joe Biden seem like he’s a fit and healthy silver fox rockin’ his aviator sunglasses like Maverick.

The reality is totally different!

Joe was actually walking by himself today, and people couldn’t help but notice how much worse his walk — or “shuffle” has gotten. The “gait,” or manner of his walk is becoming more and more cumbersome and awkward. There’s a stiffness and insecurity and hesitation that was there before, but not as bad as it is now.

I am not the only one who noticed this, actually, many people commented on it, after watching this clip.

Here’s what Americans had to say about Biden after watching the video:

“Can you really call that walking? It’s more like shuffling.”

“I refuse to believe 80 million people were stupid enough to vote for this fu**ing dummy.”

“Is there something on the leg? Weird…”

“He walks like his shoes are two sizes too big.”

“Last night he was insulting MAGA voters at a dem fundraiser shaking hands, sniffing and kissing, today he’s shuffling like a zombie”

“It’s not a mask. It’s a gag his Handlers use to keep him quiet”

“Something’s not right with his leg. I wonder if he injured it from that bike fall?”

“Every time I see him walk, his gait concerns me. It’s not normal.”

“Is it just me or is Joe’s walk looking a lot more stiff and clumsy?”

“Is there something wrong with his leg?”

“The way he’s walking looks like he entered a corn cob contest, if you know what I mean”

“Symbol of strength right there LOL”

“This the same guy speaking last night at the school?”

“This is the real WALKING DEAD”

“He walks with the gate of a dementia patient.”