Home Culture Video: Man Tries To Pick Up His Son From His Exes House... 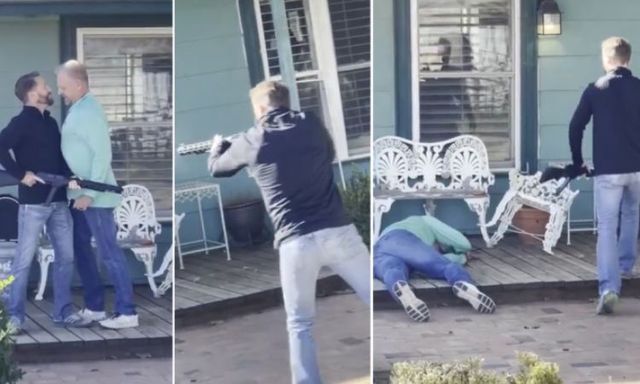 Court records show that the suspect in a fatal shooting early this month in South Lubbock is William Kyle Carruth, a land developer and the ex-husband of the judge for the 72nd District Court in Lubbock and Crosby counties.

Carruth’s lawyers who shot and killed a woman’s ex-husband after a heated confrontation outside their home say the killing was a “justifiable homicide” under the state’s self-defence laws.

Police have not laid any charges against William “Kyle” Carruth, who shot and killed Chad Read, 54, in the north-western city of Lubbock on November 5, local media reported.

Two videos of the deadly incident, one released by Mr. Read’s widow and one by Mr. Carruth’s lawyers, depict the confrontation between the two men moments before the shooting.

In the videos, Mr. Read is seen arguing with a woman, identified as his ex-wife, over a child custody issue.

The video, captured on a cellphone from a vehicle parked in front of the home, starts off with Carruth telling Chad to get off his property as Read argues with his ex-wife, Christina, about not having one of his sons at the court-ordered time.

Chad can be heard telling her that he was supposed to have his son at 3:15 p.m. During the argument, Christina could be heard saying the child was not at the residence and that she was going to fetch him.

Christina then tells Chad that she didn’t abide by the court-ordered deadline because she wanted to see their son. “I don’t care if you wanted to see him or not,” Chad Read responds. “I get him at 3:15 p.m. If you want to see him, you see him up until 3:15. You keep trying to keep my son from me.”

Carruth then emerges from the residence armed with a rifle, repeatedly asking Chad to leave his property. The argument escalates as Chad approaches Carruth, who fires a warning shot in the ground. Chad gets more agitated and a struggle ensues with him attempting to grab the barrel of the rifle.

Chad dares Carruth to fire the weapon. “Do it,” Read can be heard saying. “You better f-cking use it.” Chad pushes away Carruth, who is thrown off a few feet, spins around, and fires two shots at Chad, who could be heard saying, “think I’m f-cking scared?”

The camera pans to Chad who lies motionless on the porch floor as Jennifer asks someone to call 911. Before the video ends, Carruth can be heard telling Jennifer, “None of you all should be here. I asked you to leave. I did everything … I did not want to do any of this.”

Another video provided by Carruth’s lawyer and taken from inside the house, shows Chad asking Carruth, “Where’s my son?” before the altercation.

The lawyer praised the Lubbock Police Department’s handling of the case.

“It is my opinion, because of their knowledge of all the facts and the Texas Castle Doctrine and having done a thorough job, LPD knew this was a justifiable homicide,” he said.

“They knew they lacked probable cause, and did not arrest him. I’m sure this and other information will be provided to a Lubbock County grand jury for further review. Kyle co-operated with law enforcement. Our hopes are that a Lubbock grand jury will do a thorough investigation of all the facts and will clear Mr Carruth.”

He added that “everyone regrets the entire situation”.

“Though Read came unarmed, he announced his intent to kill Kyle Carruth with Kyle’s own gun and took immediate powerful action to do so,” he said.

“[It] was unsuccessful. Careful study of the video showed Kyle’s gun was brandished but never pointed at Read. It was only after Mr Read said ‘I’ll take your gun,’ and slinging him across the patio like a scarecrow – then stepped toward him – that Mr Carruth pointed the gun at Mr Read.”