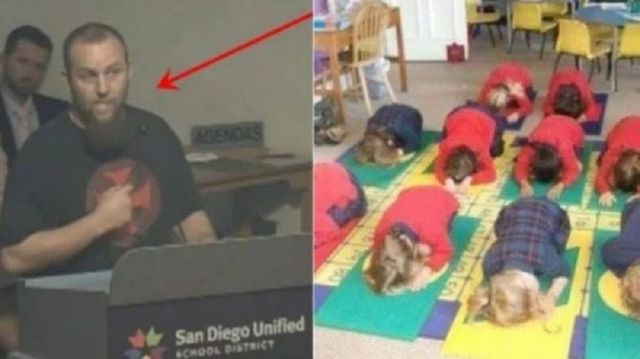 Christopher Wyrick berated the San Diego Unified District School board because he had enough of Islam being shoved down his child’s throat.

Wyrick held his ground and did not back down. He told the board, “You’re gonna have to drag me outta here.”

Christopher Wyrick: “I’m a resident of San Diego. I’m a taxpayer, a father and a husband and a VERY proud American. Over the years I’ve had many titles, one of them I will not accept is Infidel!

There’s been an argument over the years to keep religious beliefs out of school especially any that happen to be associated with Judaism or Christianity, so at what point did you decide that it was okay to teach my children about Islam?”

Wyrick went off about CAIR, a Hamas front group operating in the U.S.

You’ve allowed CAIR to come into our public schools and they begin to implement pro-Islam curriculum. What’s next? Teaching them about the 5 pillars or the conversion prayer?

At this point, one of the board members tried to stifle Wyrick by telling him his “1 minute was up” and Wyrick refused to be quiet or leave and said, “Oh dude I’m gonna go, you’re gonna have to drag me outta here.”

The people in the auditorium started cheering Wyrick’s defiance.

Wyrick also pointed out CAIR’s ties to terrorism and the board members tried to tell him to get lost again so he says, “Yeah whatever!” and kept going off on them!

He ended his speech by calling the board members hypocrites as he walked out. You can also here a liberal dhimmi call Wyrick a bigot as he’s exiting the room.

This man is a hero! Every parent should be berating school boards and demanding Islamic propaganda be removed from our schools!

Islam is a religion, not a race and it has no place in our public schools!

Watch Wyrick let them have it in the video below.

We all need keep an eye on what is being taught in our public schools. There is a liberal agenda in this country to teach our children things that should only be taught by parents or guardians.