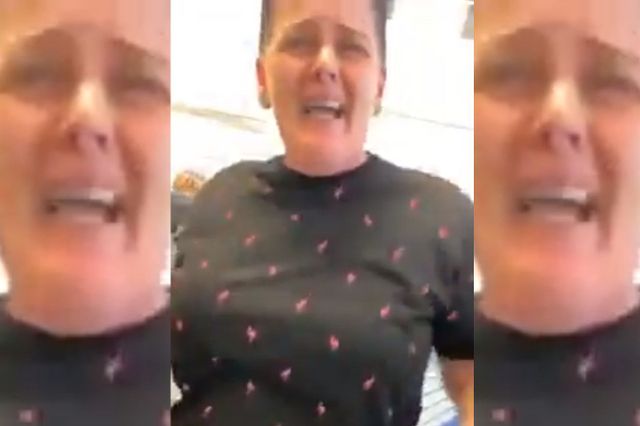 One of the most outspoken supporter of the President was attacked on Saturday by a deranged leftist.

The Trump supporter is known as “Paloma for Trump” and has a website that states:

I am an American loving activist, born in Mexico, came to America legally as a kid at 10 years old, though I visited America for the first 10 years of my life and went back to Mexico always knowing and loving this beautiful nation. After my biological father died in Mexico, my mother remarried a wonderful American Citizen, who became my step dad and gave me the blessing of becoming a US Citizen. We waited for almost 10 years to finalize our citizenship, we paid our dues, we waited in line, and I feel every person who comes to America should not only do the same, but also learn the language, assimilate the culture, respect and love America like I do. And VALUE AND THANK GOD EVERY SINGLE DAY for the gift and blessing it is to be a part of the greatest country in the world.

I travel between Mexico and different cities and states in America sharing the REAL STORIES, Real News as it is the Only way we will be able to fight back against so much corruption, deceit and the destruction of our great country!

I have seen the destruction of places like California for years, been fighting this third world invasion for years. President Trump was the answer to my prayers as so many others. I want America and the world to HEAR MY MESSAGE, MY TRUTH, TO SEE WHAT I HAVE SEEN! The ABUSE, THE FRAUD, THE THREAT AMERICA IS UNDER IF DO NO ACT NOW!! We NEED TO COME TOGETHER AND FIGHT FOR AMERICA BEFORE IT IS GONE FOREVER! I love America from the bottom of my heart! I never want to lose the country that made my dreams come true!

Paloma was at the post office wearing her Trump hat when someone of an unknown gender, started ranting how they do not want to be recorded and then rushes at Paloma and appears to shove her while Paloma repeatedly tells the person “don’t touch me!”

It appears there must have been confrontation between the two preceded the video. Most likely because of the Trump hat.

“This is a government office. I have a right not to be recorded!” the angry woman screamed at the postal employees.

“I didn’t lay my hands on you,” she said before again shoving the camera.

A post office employee stepped between the two in an attempt to calm the disturbance while they continued to bicker back and forth.

The ranting person of unknown gender then began recording Paloma with their own phone.

“Take my picture, and make you share it everywhere because I support the president of America,” Paloma said. “And if you don’t agree with that than maybe you should move somewhere else.”

“If you don’t like America, you should move out of America. Go to Mexico, go to Central America.”

Soon after the recorded incident, the police showed up at the post office.