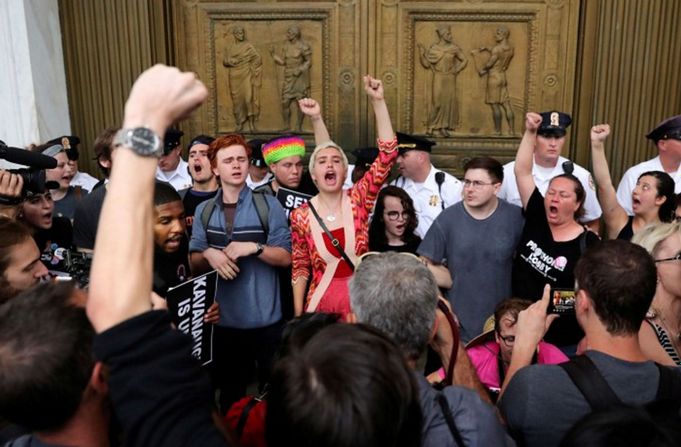 Okay, Patriots, I must admit when Donald J. Trump was elected as President of the United States of America, it appears to have created a new mental illness. While freedom-loving Americans survived eight, long and painful years of the Obama administration, it looks as though the looney left can’t handle the idea of President Trump and his happy Deplorables.

Just hearing the term MAGA causes fear in the hearts of those who proudly call themselves tolerant and inclusive. Just wearing the red MAGA hat, or a Trump t-shirt brings a violent response from these enlightened leftists.

We all watched in horror as the Democrat-controlled media and the crazy Hollywood crowd attacked a young Trump supporter for supposedly showing disrespect to a Leftist protestor at the March-for-Life event in Washington DC. Then after closer inspection of the videos, it was proven the young man had stood his ground with no response. Just another example of liberal tolerance.

The videos of attacks on Trump supporters have gotten out of control. Let’s take a look at a few of them.

Okay, that was off the charts crazy!

Wow, I guess I won’t be flying on Frontier.

Dang, how does she survive each day? Give her a pillow, a pacifier, and send her to the timeout corner.

This next video is just more evidence of the tolerant left.

There you have it, my fellow Patriots, and these are only a small sample of the reaction to someone wearing a red MAGA hat or Trump t-shirt.

As a PROUD Trump Deplorable, I have mixed feelings whenever I watch one of these videos. First, it makes me angry to see my fellow Patriots attacked for exercising THEIR freedom of speech. However, once I calm down, it makes me laugh to see how something so harmless as a hat or shirt can ignite such anger and fear.

With each crazed incident as the ones shared above, it only proves how threatened those on the left are about the once silent majority standing up and saying, “NO MORE! We are taking OUR country back!”