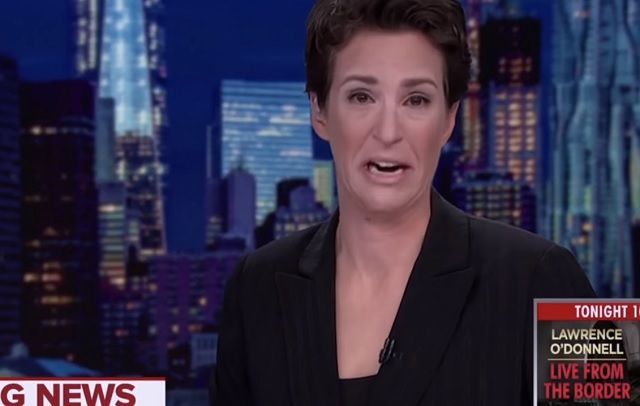 Paul Manafort was lobbying against Russian interests in Ukraine — not for them as Rachel Maddow and others have been claiming for months — according to new documents released from special counsel Robert Mueller’s investigation.

According to records produced by Mueller himself, the nature of the work Manafort did in Ukraine (lobbying *against* Russia’s interests) is the polar opposite of how it’s been portrayed in US media. The level of narrative manipulation here is a astounding https://t.co/fxbqQSCvhy

The Real News’ Aaron Maté broke it all down Friday on Twitter:

Mueller includes emails/documents showing Manafort briefing colleagues and clients — including the “pro-Russian” President Yanukovych — of his efforts to push “Engage Ukraine,” Manafort’s strategy for Ukraine integration with EU, to ensure Ukraine does not “fall to Russia”: pic.twitter.com/3XzQheZDS1

Here is Manafort briefing Yanukovych directly on his efforts that “gained considerable ground in enhancing [Ukraine’s] relationship with” the US, having “adopted issues of importance to USG” and “objectives which are in alignment with the West.”: pic.twitter.com/jb5dir0lUz

Here is Manafort noting that his team worked with Obama White House officials on the National Security Council on releasing a “very favorable” statement, and also briefed “key members” of the US government, bipartisan lawmakers and Obama officials: pic.twitter.com/zrd703ckWA

Maté wrote Friday in The Nation:

It is often speculated that Manafort’s Ukraine stint is relevant to a Trump-Russia conspiracy plot because, the theory goes, he served Kremlin interests during his time there. The opposite is the case, as Manafort’s former partner-turned-prosecution-witness, Rick Gates, reaffirmed during trial. Gates testified that Manafort pushed his client, then–Ukrainian President Viktor Yanukovych, to align with the European Union and away from Russia. According to Gates, Manafort was paid lucratively to craft a policy known as “Engage Ukraine,” which “became the strategy for helping Ukraine enter the European Union.” Given that the tug-of-war between Russia and the EU (with US backing) over Ukraine sparked a full-blown international crisis and a new Cold War, Manafort’s strategy would be an odd one for a supposed Kremlin stooge.

Putting aside Manafort’s record in Ukraine, there have been attempts to tie him to a potential Russia conspiracy via his financial debts to Russian tycoon Oleg Deripaska. During the campaign, Manafort wrote to an associate about leveraging his position in the Trump camp in order to “get whole” with Deripaska, even suggesting that he offer “private briefings.” Could this have been, pundits suggest, where a collusion plot was hatched?

Deripaska denies ever having been offered private briefings by Manafort. Another impediment to tying Deripaska to a Trump-Russia collusion plot is that Deripaska has connections to the figure arguably most responsible for the allegations of collusion. Christopher Steele, the former British intelligence agent whose DNC-funded “dossier” alleged a longstanding Trump-Kremlin conspiracy, has served as an intermediary for contacts between Deripaska and US officials. Deripaska even has a link to Mueller and the federal agency he once headed. In 2009, when Mueller was in charge of the FBI, Deripaska ponied up millions of dollars for a secret effort to rescue a captured CIA operative, Robert Levinson, in Iran. In return, the FBI–with the encouragement of Steele–helped secure a visa for Deripaska, who had been banned from the United States for alleged ties to Russian organized crime. In short, Deripaska’s various contacts make plain that Manafort’s financial ties to him, illicit or not, do not necessarily lead to a Kremlin conspiracy.

Most critically, Mueller has yet to allege one. Prosecutors openly acknowledged before Manafort’s first trial that the case had nothing to do with “evidence or argument concerning collusion with the Russian government,” while the judge in Manafort’s upcoming second trial notes that the collusion investigation is “wholly irrelevant to the charges in this case.”

The same could be said for all of the other charges in the Mueller investigation to date.
No doubt Rachel Maddow, Chris Hayes and the rest of the fake news media will be issuing formal retractions any day now!

Before I show you what Gates said, I want to demonstrate why I’ve argued that pundits like @Maddow have become straight-up propagandists on this issue. Here is Maddow last night saying that Gates’ testimony *substantiates* the Manafort-Russia tie: pic.twitter.com/GMmuFq3eKt