Even before his first suspected suicide try last month, Jeffrey Epstein was perhaps the most high-profile inmate in the federal jail system: A politically connected financier accused of sexually abusing dozens of underage girls. He was, by all accounts, the kind of inmate that should have been under the closest possible supervision.

Instead, Epstein was taken off suicide watch in the days before he took his own life, officials told NBC News, a decision that baffled former wardens and veterans of the federal prison system.

Jeffrey Epstein was found unresponsive in his cell at Metropolitan Correctional Center around 6:30 a.m., the Bureau of Prisons said. He transported in cardiac arrest to New York Downtown Hospital at 6:39 a.m., according to sources.

The results of the autopsy are finally here.

The New York City medical examiner’s office said Sunday that it had completed an autopsy of the financier and accused sex trafficker Jeffrey Epstein but that it needed more information before determining the cause of death.

Multiple people briefed on the investigation told NBC News that suicide remains the presumed cause of death and that no sign of foul play has emerged in the day and a half since Epstein, 66, was found unresponsive in his federal jail cell in lower Manhattan on Saturday.

Chief Medical Examiner Barbara Sampson also noted that Epstein’s representatives have hired celebrity pathologist Michael Baden to conduct an independent autopsy and they were allowed to observe the autopsy. Baden, who served at the city’s chief medical examiner in late 1970s, has made a career investigating high-profile deaths, including Michael Brown, who was killed by a police officer in Ferguson, Missouri, and former New England Patriots star Aaron Hernandez. Baden also testified at the murder trials of O.J. Simpson and Phil Spector.

It was not immediately clear if Epstein’s body had been released or who was going to be claiming it, or who “those representing the decedent” were.

If it is formally determined that Epstein died at his own hand, his estate, whose members are unknown, could press a claim for wrongful death while he was in the custody of the state.

“People close to Epstein” had said Saturday that “he seemed recently to be in good spirits” and they “expressed concern about the possibility of foul play,” according to the account of  “one person familiar with their discussions” cited by The Washington Post on Saturday.

Video Reveals How The Media Tries To Show That Biden Is Doing The Interview Alone – When He Fumbles They Are Forced To... 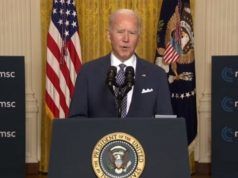 Did Joe Biden Use The N-Word? The”President” Fumbles During His Latest Speech And Is Accused Of Racism On Social Media (Video)

Video Reveals How The Media Tries To Show That Biden Is Doing The Interview...

Brace Yourself America – High School Forces Kids In Band To Play In Green...

Did Joe Biden Use The N-Word? The”President” Fumbles During His Latest Speech And Is...

Texas Warning: Videos From Concerned Citizens Show Parasites In The Water As Many Texans...

Texas Gov Abbott Declared A State Of Disaster On Feb 12 – Did Biden’s...

Video Reveals How The Media Tries To Show That Biden Is...

Brace Yourself America – High School Forces Kids In Band To...

Did Joe Biden Use The N-Word? The”President” Fumbles During His Latest...