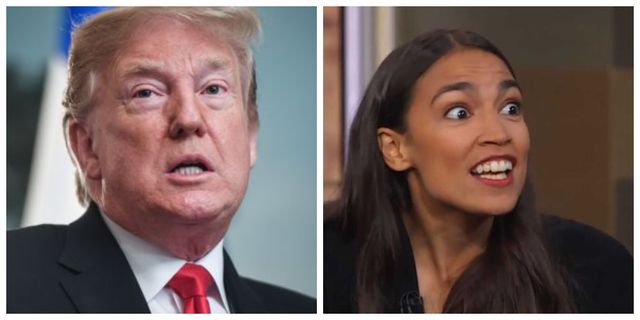 The Mueller report was released publicly Thursday morning and concluded that the Trump campaign did not conspire with the Russian government to win the 2016 presidential election. One other important note of the report is that the special counsel detailed ten examples that could be viewed as obstruction of justice, but opted not to determine whether or not they were in fact crimes.

Attorney General William Barr and Deputy Attorney General Rod Rosenstein reviewed the facts Mueller laid out and determined that there was not proof beyond a reasonable doubt that Trump committed obstruction of justice.

Alexandria Ocasio-Cortez said it is her constitutional duty to sign the impeachment resolution against President Trump, citing Robert Mueller helped her with her decision.

“Mueller’s report is clear in pointing to Congress’ responsibility in investigating obstruction of justice by the President.

It is our job as outlined in Article 1, Sec 2, Clause 5 of the US Constitution.

As such, I’ll be signing onto @RashidaTlaib’s impeachment resolution,” she tweeted:

Mueller’s report is clear in pointing to Congress’ responsibility in investigating obstruction of justice by the President.

It is our job as outlined in Article 1, Sec 2, Clause 5 of the US Constitution.

As such, I’ll be signing onto @RashidaTlaib’s impeachment resolution. https://t.co/CgPZJiULOL

Fellow freshman Rep. Rashida Tlaib (D-Mich.) last month introduced a resolution calling for an investigation by the House Judiciary Committee into whether Trump committed impeachable offenses. Tlaib said at the time that she hopes the resolution “ensures we don’t have a lawless society that results in irreparable harm to the American people.”

Rep. Al Green (D-Texas) also reiterated his support for impeaching Trump after the Mueller report’s publication. Green has repeatedly pressed for Trump’s removal, including over the objections of House Democratic leadership.

He said during a Thursday press conference that Mueller has “given us ample evidence for us to move forward with impeachment.”

So you have a two-year investigation that comes back clean but all the people in the media and everybody else it had nothing to do with the investigation have all the answers so why do we even have the investigation I thought it was to bring Clarity to the situation and obviously they just want to keep mudding up the water.

To remove a sitting President, there must be Impeachment proceedings. The House conducts the preliminary proceedings, to see if the allegations have been proven, and the Senate determines the sentence. To sustain their burden, the President must have committed a crime. Well, we know it sure as hell wasn’t collusions with the Russians…….so what crime did he commit?