Eric Trump, the son of President Donald Trump, was spit on by an employee of a Chicago bar Tuesday night, multiple sources told NBC 5. Eric Trump later confirmed the incident

Eric Trump was seen leaving the restaurant in a motorcade of two black SUVs. In a statement to right-wing commentary site Breitbart News, he called the incident “purely a disgusting act by somebody who clearly has emotional problems.”

“It was purely a disgusting act by somebody who clearly has emotional problems,” Eric Trump told Breitbart. “For a party that preaches tolerance, this once again demonstrates they have very little civility. When somebody is sick enough to resort to spitting on someone, it just emphasizes a sickness and desperation and the fact that we’re winning.”

The Daily Caller reported that the Secret Service has reportedly detained a restaurant employee that allegedly spit on Eric Trump.

An employee at the upscale restaurant Aviary in Chicago was arrested.

Chicago police responded to the scene, with CPD spokesman Anthony Guglielmi tweeting just before 10:30 p.m. that officers were “assisting the United States Secret Service with a law enforcement matter,” adding that any further inquiries “regarding a federal protectee” should be directed to the Secret Service. The Secret Service declined to comment.

This is disgusting and vulgar that anyone does spitting on anyone. Lowest character…shows what many on the left are encouraged to do! 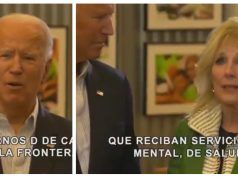 Video Reveals How The Media Tries To Show That Biden Is Doing The Interview Alone – When He Fumbles They Are Forced To...

Did Joe Biden Use The N-Word? The”President” Fumbles During His Latest Speech And Is Accused Of Racism On Social Media (Video)

Video Reveals How The Media Tries To Show That Biden Is Doing The Interview...

Brace Yourself America – High School Forces Kids In Band To Play In Green...

Did Joe Biden Use The N-Word? The”President” Fumbles During His Latest Speech And Is...

Texas Warning: Videos From Concerned Citizens Show Parasites In The Water As Many Texans...

Texas Gov Abbott Declared A State Of Disaster On Feb 12 – Did Biden’s...

Video Reveals How The Media Tries To Show That Biden Is...

Brace Yourself America – High School Forces Kids In Band To...

Did Joe Biden Use The N-Word? The”President” Fumbles During His Latest...