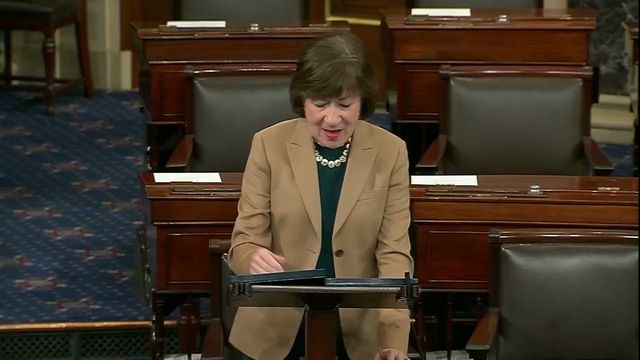 And one of these traitors decided to finally reveal why she voted against Trump’s national emergency!

By declaring a national emergency, the President’s action comes into direct conflict with Congress’ authority to determine the appropriation of funds – a power vested in Congress by the framers of our Constitution in Article 1, Section IX. That is why this issue is not about strengthening our border security, a goal that I support and have voted to advance. Rather, Mr. President, it is a solemn occasion involving whether or not this body will stand up for its institutional prerogatives and will support the separation of powers enshrined in our Constitution.

Collins spoke about the way in which “the courts have determined the boundaries of presidential authority, vis-a-vis Congress,” using a very specific case regarding presidential seizure of property. That case was Youngstown Sheet & Tube Co. v. Sawyer, which was decided in 1952:

As Justice Robert Jackson explained in his profoundly influential concurrence in that case, the question of whether a President’s actions are constitutionally valid should be determined by examining the source of the President’s authority…

Now, the President rests his declaration on the National Emergencies Act, and that act fails to define precisely what constitutes an emergency, but there is a commonsense rule that we can apply. It is a five-part test that was used by the Office of Management and Budget under former President George Herbert Walker Bush to determine whether or not requested funding merited an emergency designation under our budget rules. Under that test, a spending request was designated as an emergency only if the need for spending met a five-part test. It had to be necessary, sudden, urgent, unforeseen, and not permanent. Now, whether or not one agrees with President Trump that more should be done to secure our southern border – and I do agree with him on that goal – his decision to fund a border wall through a national emergency declaration would never pass all of this five-part test.

She concluded with a silent point, saying that this vote is not about whether or not one desires more advanced border security, but whether or not the president should have “the power of the purse,” which is expressly granted to Congress in Article I, section 9, clause 7 of the Constitution:

Let me emphasize once again that the question presented by this resolution is not whether you’re for a border wall or against a border wall. It is not whether you believe that border security should be strengthened or whether it is sufficient. It is not whether or not we support or oppose President Trump. Rather, the question is a far more fundamental and significant one. The question is this: do we want the executive branch now or in the future to hold the power of the purse – a power that the framers deliberately entrusted to Congress? We must stand up and defend Congress’ institutional powers as the framers intended that we would, even when doing so is inconvenient or goes against the outcome that we might prefer. I urge my colleagues to support the resolution of disapproval and our Constitution.

I joined 12 of my Republican colleagues in supporting a resolution to block the national emergency declaration.

This isn’t a debate about whether you support the wall or oppose the wall. It’s constitutional debate where Congress must protect its institutional prerogatives. pic.twitter.com/i1Bd10qfgw

Sen. Thom Tillis (R-NC), who previously signaled he would vote to end the emergency, said he will back Trump’s emergency after Trump said he will work with Republicans on a president’s national emergency authority. Tillis is up for re-election in 2020.

Trump has promised to use the first veto of his presidency to strike it down, and Congress does not have the votes to override the veto.

They just can’t seem to get it through their corrupt little Globalists minds. They are not going to find anyone to vote for them. These people are so cowardly, they can’t even figure out we are at a point where the nation could go Communist, they just sit on their hands and do nothing. Rinos are totally incompetent and stupid or totally corrupt. Time and history will tell.

These RINO traitor Senators must go. They are against the US and only care about their big donor money.