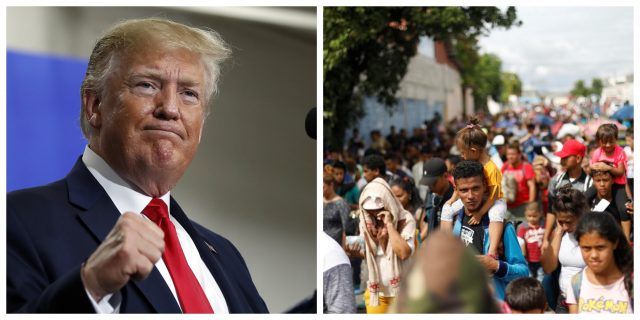 President Trump threatened to punish Guatemala for what he described as the country’s reneging on a proposed deal to welcome Central American asylum seekers.

Guatemala, which has been forming Caravans and sending large numbers of people, some with criminal records, to the United States, has decided to break the deal they had with us on signing a necessary Safe Third Agreement. We were ready to go. Now we are looking at the “BAN, Tariffs, Remittance Fees, or all of the above. Guatemala has not been good. Big U.S. taxpayer dollars going to them was cut off by me 9 months ago.

It seems that White House is working on imposing a travel ban against Guatemala unless the Central American nation takes significant steps in helping the U.S. in stopping illegal immigration.

“If Guatemala doesn’t take significant action to help protect our borders, then we will, of course, look at all manner of solutions to the serious crisis we face,” a White House official told NPR, “whether it’s a travel ban, significant actions on remittances and/or tariffs.”

The White House is looking at the authority already granted to the executive branch to suspend the entry of classes of people when it’s considered detrimental to national interests.

One of Trump’s strategies for reducing the number of people crossing the border is to get them to go through the asylum process outside of the United States. Guatemala was particularly important for that strategy; the deal would have obligated migrants who traveled through Guatemala to seek protection there instead of traveling to the U.S.

This month,Guatemala’s high court blocked its government from signing the deal with the United States.

Guatemalan President Jimmy Morales canceled a trip to Washington this month for discussions on a deal that would have required migrants from El Salvador and Honduras to seek asylum there rather than in the U.S.

He decided to cancel the trip after the high court blocked him from signing the deal.

VIDEO: Antifa “Insurrectionist” Attacking A US Senators Office With A Deadly Weapon – Dems Give Him Money, FBI Give His Weapon Back No Media...