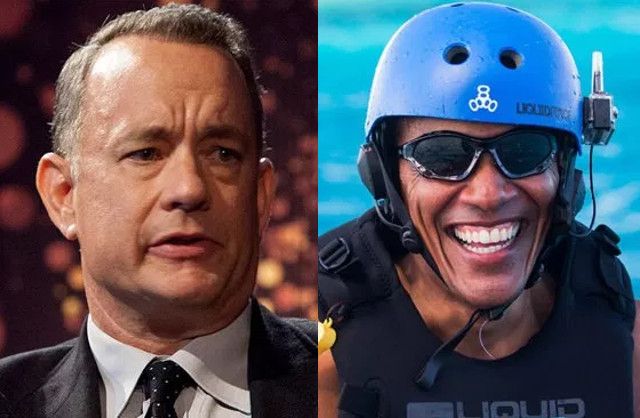 Actor and Hollywood legend Tom Hanks recently met up with Barack Obama while Obama was on vacation in Polynesia. Apparently, Hanks had less than a spectacular time there because he described, in his words, how he got “screwed.”

Hanks also met up with Bruce Springsteen and Oprah Winfrey there.

He described a horrible biking trip, awkward conversations with Obama, and expressed how uncomfortable it was and how he would never do it again.

“It was miserable, it was miserable,” Hanks said. So you tell me? “You want to repeat that exercise? You want to go back on that vacation boat? I don’t think so! I would rather go back and get legionnaire disease on that boat!”

Hanks recalled a lousy time he had on a French Polynesian island where he met up for a bike ride with the Obamas and Oprah. He said that when they all got their bikes, there was a big problem.

“An array of bikes have been procured for us, rented from all corners of Polynesia and Tahiti, Bora Bora,” said Hanks. He then said that everyone got on their bikes—including the Secret Service—and left Hanks in the dust. It only got worse when he looked down and realized what he was left with.

He called it an “undersized girls’ bike (with only) one gear.” Furthermore, he said it was coated in rust and would have been difficult to even deliver newspapers with this bike.

Hanks also described times he would talk to Obama about political policies and things of that nature. He recalled that Obama would interrupt him and tell him that what he was asking is “classified” about three times a day.

Although most people probably take the story with a sense of humor, It is obvious Hanks was treated terribly on the trip. Why would Obama treat a guest that way?

We are glad Mr. Hanks had the nerve to come forward and tell us all what happened to him.

Oprah Winfrey might be keeping mum on the star-studded Tahitian vacation with the Obamas, but Tom Hanks isn’t. The Circle star regaled Stephen Colbert with tales of his excursions with former President Barack Obama on The Late Show Friday night, and it turns out mountain biking wasn’t exactly a joy ride for “little Tommy Hanks.”

“I’ll tell you one thing that happens to Tom Hanks, little Tommy Hanks on that trip,” he said before declaring, “He gets screwed,” but “in the bad way, in the pejorative way, not in the delightful way.”

While experiencing a “crazy Love Boat, Sandals resort fantastic” vacation, “they say, ‘Hey, tomorrow let’s get, we’ll get some bikes,” Hanks explained. He noted “an array of bikes have been procured for us, rented from all corners of Polynesia and Tahiti, Bora Bora.” But when “everybody gets on their bikes and takes off” — including Secret Service — he’s left with the “one piece of junk, hunk-o’-junk bike.”

“I had a bike that you couldn’t deliver newspapers with,” Hanks said. What proceeded was an “up, up, up”-hill ride on a “rusted,” “undersized girls’ bike” with only “one gear.”