Home Opinion What Trump Has Said About Julian Assange Today And In 2016 Will... 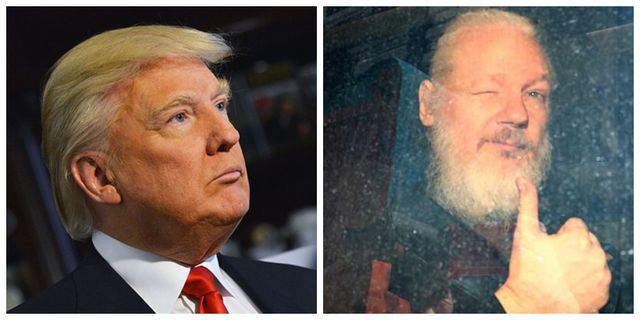 Assange was arrested by British police “on behalf of US authorities” and dragged from the Ecuadorian Embassy in London where he has been claiming asylum for seven years.

Speaking to journalists just hours after Assange’s arrest, Trump, who claimed to love WikiLeaks during his election campaign, said:

President Donald Trump said Thursday that he knows “nothing about WikiLeaks” hours after the arrest of the organization’s founder, Julian Assange, and two-and-a-half years after he frequently cited its information dumps about Hillary Clinton during the 2016 campaign.

“I know nothing about WikiLeaks,” Trump told reporters at the White House, where he met with South Korean President Moon Jae-in. “It’s not my thing. I’ve seen what’s happening with Assange.”

Later Thursday, during a White House event with World War II veterans, Trump said, “I don’t know much about it.”

Assange could be extradited from the United Kingdom in order to face a computer hacking charge in the U.S.

Trump repeatedly professed his affinity for WikiLeaks during the 2016 campaign, when it published emails that were stolen from Democrats by Russian hackers as part of Moscow’s effort to hurt Democratic presidential nominee Hillary Clinton.

“I love WikiLeaks,” Trump said at an October 2016 rally in Pennsylvania.

“Getting off the plane, they were just announcing new WikiLeaks, and I wanted to stay there, but I didn’t want to keep you waiting,” he said four days before Election Day that year. “Boy, I love reading those WikiLeaks.”

Trump mentioned WikiLeaks 145 times in the final month of the campaign alone, according to NBC News.

Why this change of feelings toward Assange, this is really surprising!