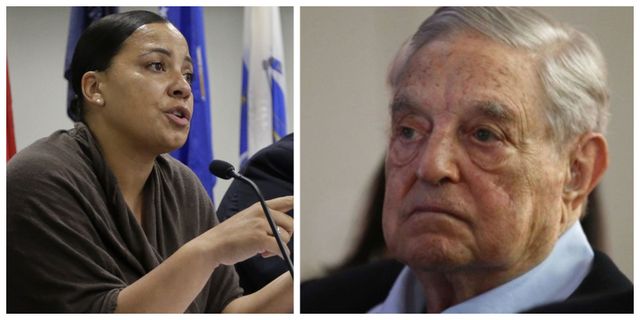 A judge Tuesday granted a nolle pros, which essentially means the case has been dropped and that Jussie Smollett will no longer be prosecuted for the alleged crimes.

It’s unclear at this time why the court decided not to proceed with the prosecution but Smollett is expected to give a statement after he leaves the courthouse later.

But it seems that she is not the only judge that was received donations from Soros.

Soros has spent heavily on backing “progressive” candidates for local prosecutorial offices across the nation, following the rise of the Black Lives Matter movement in 2014, which alleged that black defendants have been treated unfairly by the justice system.

And now the Gateway Pundit reported another case where Soros Funded judge prevented Boston PD from doing their jobs!

The far left District Attorney announced new orders for police officers who are no longer allowed to arrest people for shoplifting, for breaking and entering, for destruction of property/vandalism, for resisting arrest, for disturbing the peace, and for drug offenses.

Rollins also ordered police to refuse access to ICE officials for the arrest any illegals in courthouses — no matter the crime.

Rollins is linked to the far left program originally funded by George Soros to support far left radicals in deep blue cities across the US.

Police are instructed to notify her office if anyone tries to deport an illegal alien.

Rachael Rollins also wants judges to lower charges against illegals so that they will not get deported.
She is attacking law enforcement and aiding criminal behavior!

“I don’t believe accountability has to equal incarceration. There are many ways we can hold people accountable without putting them in jail,” Rollins writes, according to the policy paper obtained by the Herald and later made public by the DA Monday.

As for the county’s “foreign-born population” when accused of crimes, Rollins’ memo states her office “will begin to factor into all charging and sentencing decisions the potential of immigration consequences.”

That includes taking into consideration any defense attorney’s “failure to provide accurate advice” about a suspect’s chances of being grabbed by federal immigration officers.

Rollins adds that if a DA’s office employee “observes Immigration and Customs Enforcement officers” or Department of Homeland Security agents “apprehending or questioning” someone called to court about “residence status,” they are to immediately alert her personally, her first assistant or general counsel.

So, in other words these illegals can break the law, be free to do anything, vote, we support them, we house them, we give them health care a preferential treatment. do I have this straight?

And police cannot enforce the laws to an illegal.

It’s a sad day for our country when we allowed this!