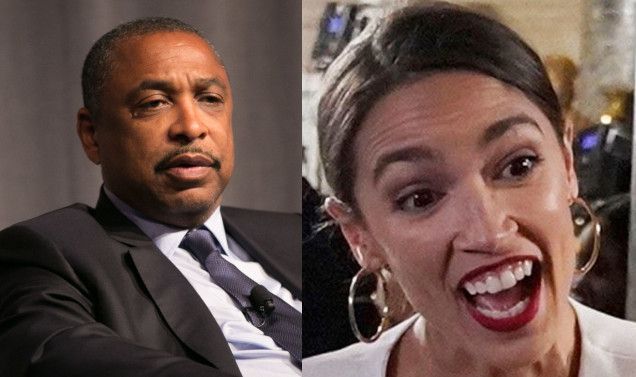 Alexandria Ocasio-Cortez was destroyed on Friday while speaking to the National Action Network.

Black business and community leaders came out and railed on her as being ignorant and driving away 25,000 Amazon jobs that could have helped a lot of people in the community.

One leader, Tracy Maitland, called her ‘”financially illiterate” and said we “vote her out of office” if she didn’t become educated in financial matters.

“The people campaigning against the Amazon campus are financially illiterate,” Tracy Maitland, president and chief investment officer of Advent Capital Management, said during a panel discussion at the National Action Network conference in Midtown.

Afterwards Maitland told The Post, “This was a disgrace. I partially blame AOC for the loss of Amazon. She doesn’t know what she doesn’t know. That’s scary. We have to make sure she’s better educated or vote her out of office.”

Maitland said the misimpression created by Ocasio-Cortez and other Amazon critics was that the state and city were giving the company a blank $3 billion check.

The reality, he said, is that Amazon was only getting tax credits based on the number of jobs created. Amazon and New York officials estimated a new headquarters in Queens would generate up $30 billion in tax revenues as well as 25,000 jobs.

Another panelist, CUNY chairman Bill Thompson, said that job opportunities were “snatched away” from the predominately black and Latino students of the City University.

“We were at the table talking to Amazon on how students could get jobs … those opportunities were snatched away,” said Thompson, the former city comptroller.

“Those students look like us … We’re talking thousands of high-paying jobs. It was a disappointment from a CUNY perspective.”

Thompson and Maitland spoke on a panel about “The Black Economic Agenda: Driving Capital into the Hands of Black Asset managers and Housing Developers” in the Empire Room of the Sheraton New York.

A couple of hours earlier, Ocasio-Cortez addressed the conference’s main audience in the ballroom across the hall and spoke mainly about inequality. Amazon’s sudden decision to withdraw from Queens — and bring 25,000 high-paying jobs — didn’t come up in that venue.

“Creating 25,000 jobs is always a positive thing,” he said. “There’s a multiplier effect.”

Ocasio-Cortez is also under fire for her use of an urban accent she never uses while speaking to the community.

Ocasio-Cortez speaks in an accent that she never uses while telling a room of predominately black people that there is nothing wrong with them folding clothes, cooking, and driving other people around on a bus for a living. pic.twitter.com/FIbIAPokt0