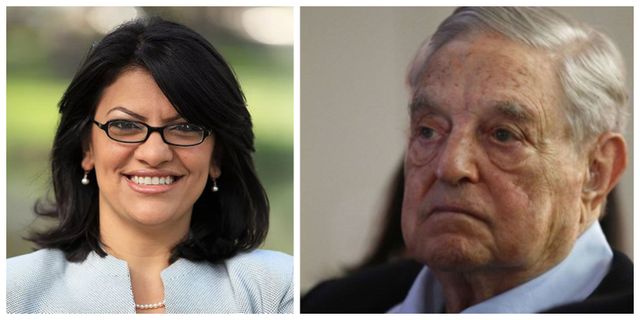 The foul-mouthed Congresswoman who referred to President Trump as a “motherf—-r”, rose to power via globalist billionaire George Soros at least a report from the WashingtonFree Beacon says so.

Like many in the Democrat Party, her journey started when she worked for George Soros, the billionaire Democrat donor.

Congresswoman Rashida Tlaib (D., Mich.) failed to disclose her financial ties to Soros – as required by the House ethics committee – and also disclosed a lesser amount than what she actively received, according to a review of tax forms.

An expenditure of $85,307 to Rashida Tlaib in Detroit, Mich., from 2017 is shown on page 97 of the 321-page report to “to increase involvement of disenfranchised urban communities of color with their local governance process by creating a community benefits strategy for equitable development and creating a leadership training for impacted residents focused on negotiation skills and identifying leverage at the local level.”

Tlaib did not report any income in the amount of $85,307 on financial disclosure forms submitted as she was running for office, which identified the names of the sources that provided her income in three of four cases. Tlaib received compensation from the Maurice & Jane Sugar Law Center, Wayne State University, and Metro Solutions, the forms show.

However, the fourth reported source of earned income is marked as a “Leadership in Government Fellowship,” but does not identify who provided the payment.

A press release from 2016 shows that Tlaib was chosen for a “leadership in government” fellowship by Soros’s Open Society Foundations along with seven other individuals.

“The eight fellows, chosen from the senior ranks of federal, state, and local government, will work on a wide variety of issue areas: devising new ways to bring criminal justice reform to local prosecutors’ offices; developing new strategies for helping school children exposed to trauma; improving life outcomes for low-wage workers, immigrants, and boys and men of color; and closing the digital divide, and more,” the release reads.

A spokesman for Soros’s Open Society Foundations said Tlaib’s fellowship was terminated earlier this year when she informed the group she would be running for Congress..

Kendra Arnold, executive director of the Foundation for Accountability and Civic Trust, a Washington, D.C.-based watchdog group, said that Tlaib’s failure to report the source of her income is “problematic” due to rules requiring that the income source be identified.

Candidates are required to disclose the name of groups and organizations that provide their source of income, according to the manual on financial disclosure statements from the U.S. House of Representatives Committee on Ethics.

“Identify the source by naming the organization, corporation, or other entity making the payment. It is not necessary that individual clients of a business be named, only the business itself,” the manual states on page 31. “For example, on Schedule C, an editor would report the name of the publishing firm as the source of earned income, not the clients for whom the work was performed. Describe the type of income as salary, commissions, fees, pension, etc., as appropriate.”

The $68,307 income marked for the “Leadership in Government Fellowship” on the financial disclosure forms is also $17,000 less than the $85,307 that was marked as being paid out by Soros’s group.

Arnold said this discrepancy is not as clear and could be the result of hard costs associated with the program.

Tlaib did receive any income from the Open Society Foundations in 2018, Soros’s spokesman said.

Tlaib’s campaign acknowledged receiving the Washington Free Beacon’s inquiry but did not explain why the source of funding was excluded from her financial disclosure forms and why the amount is lower than what she actually received by press time.

And there is more to the story. Tlaib reportedly paid herself $45,500 in campaign funds as she ran for Congress.

Why don’t people comprehend that all three of the new princesses of the Democrat party are deeply involved in campaign money laundering? They are all three turning dark money into light money by having people in and around their campaigns, including themselves “do work” for Political Action Committees. That money given for sinecure is then given to the campaign for campaign expenditures. It is easy to do and is going to be difficult to prove unless someone puts the squeeze on them and someone fesses up.