Five Houston Police officers have been shot Monday afternoon reportedly while serving a narcotics warrant according to Houston PD.

Five Houston police officers have been shot in southeast Houston. The officers were reportedly serving a narcotics warrant.

Life Flight was called to the scene. All the officers have been taken to Memorial Hermann Hospital.

Details are coming in to Eyewitness News, but we are learning two suspects are dead at the scene. Sources say a third suspect is believed to be barricaded inside the house.

The scene at 7800 Harding is still an active crime scene. Please avoid the area. #hounews

Streets in the neighborhood are blocked off and neighbors are being held at a safe distance. Media is being pushed back as police say the scene is still an active investigation.

HAPPENING NOW: HPD blocking off streets near the scene where 5 officers were shot. They’re rerouting drivers out of the neighborhood. One officer told me, “It’s still unsafe over here. Please turn around.” #abc13 pic.twitter.com/br77j52hjA

We have several officers that have been struck by gunfire, the situation at the shooting scene is still fluid. Please pray for our officers and their families. More to follow.

At this time we can confirm 5 officers have been struck and transported to Memorial Hermann Hospital, Medical Center and Ben Taub General Hospital. Further updates will be provided as available. #hounews

Please keep all the officers in your prayers!

The incident happened late Monday afternoon in the 7800 block of Harding in southeast Houston. Harris County Sheriff’s deputies and ATF agents are assisting at the scene.

A perimeter has been set up for a possible additional suspects.

Just been notified that three (3) of HPD officers have been shot. I am waiting to get a status report. I am asking for your prayers for them. st

Suspect in the HPD shooting is down. st

Multiple news sources have reported that both of the suspects are dead. 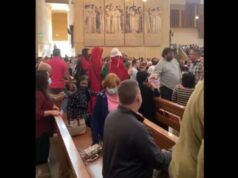