Home Culture CNN Asks Democratic Voters What They Think Of Trump… I Bet They... 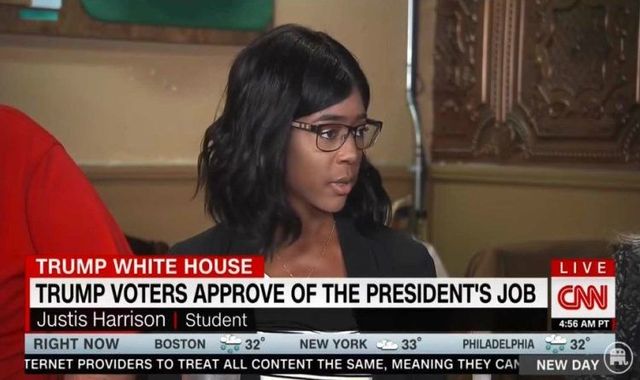 CNN decided to interview Democrats from Ohio who voted for Trump over former First Lady Hillary Clinton in 2016. For this purpose, Martin Savage sat down with a group of Democratic voters and asked them why they joined in with the 7,000 other Democrats in their county who decided to switch parties and vote for Donald Trump.

And I was very surprised that CNN showed this to the public considering what these voters said.

They were first asked how big issue immigration was, and they responded unanimously, “Huge.” Rick Green, an ironworker, said illegal immigrants were “stealing jobs of rightful citizens.”

Justis Harrison explained, “I feel like when people come here illegally, that’s just very disrespectful. You don’t respect our laws, and you shouldn’t be able to come here free-wheeling like that.”

They all agreed the wall was necessary. Geno DiFabio, the machine shop worker, even approved of Trump’s Twitter use saying, “If all he had to rely on is what people say about him, oh my god, I might not like the guy. But I love the guy, I love the job he’s doing.”

The panel did not agree with the media and the Democrats’ portrayal of Trump being a racist, as they also said he does not get a fair shake from the media.

Student Justis Harrison said she met Trump and she did not think there was any reason to even suspect that he was a racist.

“He was just the nicest person and if he was a racist as everyone paints him out to be, he could have just walked right past me and not even said a word,” Harrison said.

They then hit on the economy and tax reform, praising Trump and explaining that small businesses were booming with the economy.

Savage asked if the “media gives the president a fair shake,” and they all responded negatively, with Harrison saying, “I don’t think so at all, no.”

Most importantly, the group said that they see a president who is like them. Anna Para, a stay-at-home mother of four, stated:

“He’s like tenacious sometimes and says stuff off the cuff as we do like real Americans do. You know, we’re not perfect. I’m tired of suave, I’m tired of polished, I’m tired of the teleprompter … I am. I want my country back.”


This was a great interview, with real middle-class Americans, of all walks of life, and I don’t think that there are many people who voted for President Trump, who feel any differently. CNN DEFINITELY had to take a bite of humble pie!

And I am glad that now more than ever, there are many Democrats who’ve said they’ll never vote for any democrats again. Glad they came to their senses and realize what the Democrat leaders are doing to this country.

What do you think? Scroll down to leave a comment below!