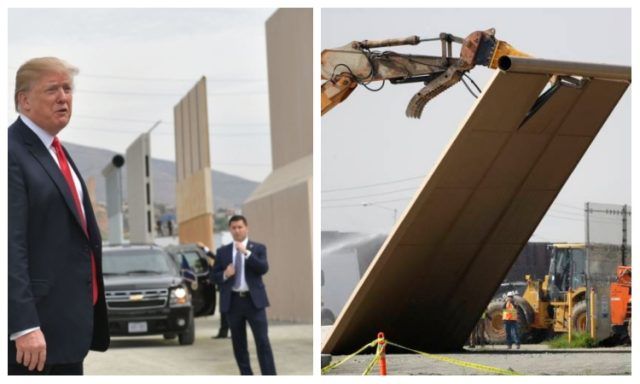 President Donald Trump decided to sign the border security deal to avoid another partial government shutdown and with that prevented millions of middle class Americans from starving!

He got only 1.4 billion for his border wall funding but even that could prove to be enough!

The president and CEO of Fisher Sand and Gravel Co. told the Washington Examinerhe could build 234 miles of wall on the U.S.-Mexico border for $1.4 billion — if President Donald Trump can get the rulebook and the bureaucracy out of the way.

For $4.31 billion, Tommy Fisher said, his company could build the Cadillac version of a border barrier, complete with a high-speed highway on the U.S. side of the wall for Border Patrol agents and the latest in technology to help detect migrants trying to enter the U.S. illegally.

“Our whole point is to break through the government bureaucracy,” Fisher told the Examiner. “If they do the small procurements as they are now … that’s not going to cut it.”

Trump is seeking $8 billion overall for the wall project, including $3.1 billion from reallocated defense funding and $3.6 billion from his emergency declaration.

But it seems he can build the wall for a lot less!

Despite the critics from the opponents of the construction of the wall, who were saying that President Donald Trump’s proposed border wall would be fiscally irresponsible, a new study from Steven A. Camarota, the director of research at the Center for Immigration Studies has found that President Donald Trump’s proposed border wall only has to stop about nine to 12 percent of all illegal crossing in order to pay for itself over the next 10 years.

Would you like this company to build the wall on our southern border?