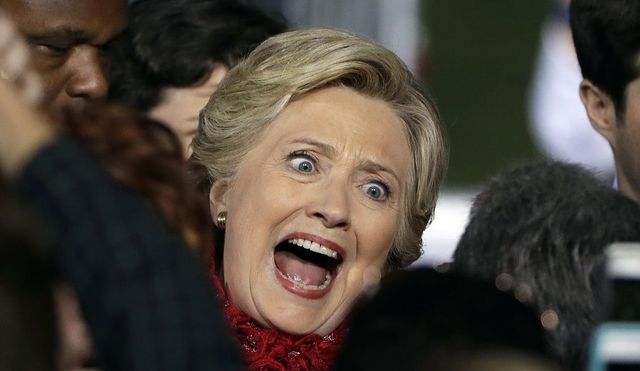 On day 845 of Hillary Clinton’s never ending blame tour, she showed up at a church service commemorating the 54th anniversary of Bloody Sunday, the civil rights march that inspired support for the Voting Rights Act of 1965.

Hillary has spent her adult life perfecting the art of the narrative, to make it appear she does nothing wrong and has the correct answer for just about everything. It is only natural that she would continue to try to convince everyone that her loss to Donald Trump had nothing to do with him being a better candidate, but rather a myriad of other reasons for her loss that has nothing to do with her failures.

In her latest appearance, Hillary began her latest conspiracy theory by saying, “I want you to just never forget, that there is an other side in America and they never give up. They never quit. They’re never discouraged. They are motivated every single day to try and pull back rights, to try to suppress rights, to try to prevent people from fulfilling their own god given potential, and so they did go to work.”  And then continued by claiming the Supreme court’s decision to “gut” the voting rights act was an “absurd decision.”

Hillary said, “I was the first person to run for president without the protection of the Voting Rights Act and I will tell you it makes a really big difference.”

She continued, “And it doesn’t just make a difference in Alabama and Georgia, it made a difference in Wisconsin where the best studies have been done said somewhere between 40,000 and 80,000 people were turned away from the polls because of the color of their skin, because of their age, because of whatever excuse could be made up, to stop a fellow American citizen from voting.”

What she was really saying, in a round about way is, requiring an ID to vote is racist and, although she didn’t campaign there, she lost in Wisconsin because of racism.

According to the state Elections Commission, acceptable IDs in Wisconsin include driver licenses; state ID cards, which can be obtained for free through the state Department of Transportation; proof that the voter has applied for a free state ID; U.S. military identification; U.S. passports; and photo IDs issued by a Wisconsin university or technical college accompanied by proof of enrollment.

It’s astounding that she actually believed she had it all wrapped up in Wisconsin and never bothered to campaign there.

In 2017, even CNN’s John King ridiculed that excuse by saying, “The Russians cloaked Wisconsin, so she couldn’t find it on a map to get there and campaign there.”