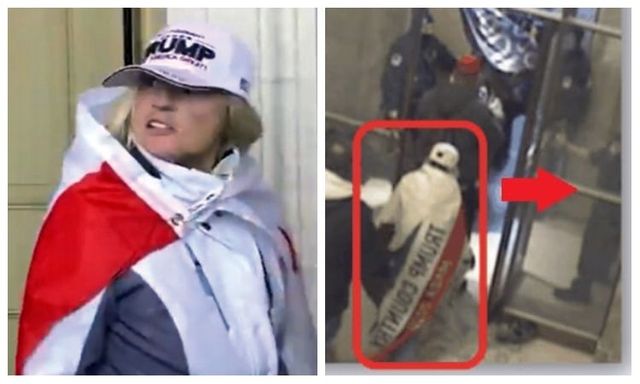 A Los Angeles County employee was arrested Monday in the City of Industry on federal charges alleging she was among the crowd that breached the U.S. Capitol on Jan. 6.

Lois Lynn McNicoll, 69, of San Clemente, a Department of Public Social Services employee, made her initial appearance in Los Angeles federal court following her arrest and was released on a $10,000 bond, according to FBI spokeswoman Laura Eimiller.

McNicoll is charged in federal court in the District of Columbia with knowingly entering or remaining in any restricted building or grounds without lawful authority and violent entry and disorderly conduct on Capitol grounds, according to a federal criminal complaint made public Monday.

An ABC7 social media post has helped lead to the arrest of a Los Angeles County employee who is accused of being among the crowd that breached the U.S. Capitol on January 6th.

McNicoll was identified in an ABC News video posted on Eyewitness News’ Facebook page in January that shows a female wearing a white hat emblazoned with the name “Trump,” according to federal prosecutors

Lois Lynn McNicoll is a white woman from California, United States. Here are 13 more things about her:

She lives in San Clemente, Orange Country, California. (a)
Aside from San Clemente, she has lived in other parts of California including Alta Loma, El Monte, Claremont and Rancho Cucamonga. (b) (c)
In June 1988, she started working for the Los Angeles County Department of Public Social Services (DPSS) as an eligibility supervisor and worker. (a) (d)
In April 2007, she became a DPSS health and human services manager. (d)
On October 7, 2020, she donated $5 to WinRed, a Republican Party fundraising platform endorsed by the Republican National Committee. (e)
On October 9, 2020, she donated $5 to WinRed. (e)
On October 11, 2020, she donated $10 to WinRed. (e)
On October 12, 2020, she donated $10 to WinRed. (e)
Wearing a white hat emblazoned with the name “Trump” with a red-and-white flag bearing the words “Trump Country” draped over her shoulders, she went to the U.S. Capitol building in Washington, D.C., USA on January 6, 2021. That day, Donald Trump supporters breached the building while a joint session of Congress was certifying the vote of the Electoral College and affirming Joe Biden‘s victory in the 2020 presidential election. (a)
On May 18, 2021, a Federal Bureau of Investigation special agent interviewed her at her workplace. She told the agent that she went to Washington, D.C. on January 6, 2021 to hear Trump speak then entered the U.S. Capitol but denied taking photos and videos while inside the building. (a)
On June 28, 2021, she was arrested, made her initial appearance in federal court in Los Angeles, California and was released on a $10,000 bond. (a)
For her participation in the U.S. Capitol riot on January 6, 2021, she was charged with knowingly entering or remaining in any restricted building or grounds without lawful authority and violent entry and disorderly conduct on U.S. Capitol grounds. (a)
She was 69 years old when she was arrested on January 6, 2021. (a)
.

(This is a developing story. More details are being added.)