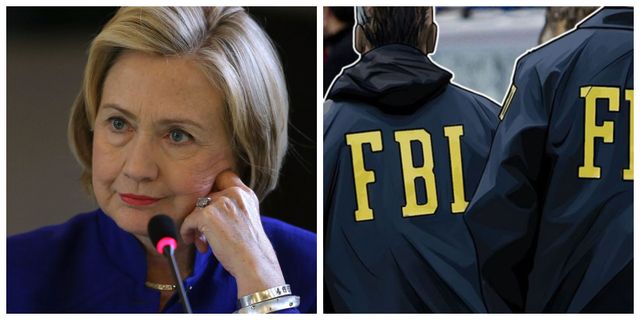 I have to say that If Hillary ever goes down for her many crimes, Tom Fitton deserves the Congressional Medal of Freedom.

The phony “which hunt”started to stop Trump from starting an investigation against Hillary if you ask me. They failed and soon people will start to pay!

After latest report from Judicial Watch, we now have official confirmation of Hillary’s cover-up.

FBI notes of an interview with an unidentified Platte River Networks official in February 2016 (almost a year after the Clinton email network was first revealed) show that Platte River “gave someone access to live HRC archive mailbox at some point.” The same notes show that an email from December 11, 2014, exists that reads “Hillary cover up operation work ticket archive cleanup.” The interviewee said that the “cover up operation” email “probably related to change to 60 day [sic] email retention policy/backup.” The subject indicated that he didn’t “recall the prior policy.” The notes also indicated, “[Redacted] advised [redacted] not to answer questions related to conv [conversation] w/DK [David Kendall] document 49 – based on 5th amendment.”

The subject said that “everyone @ PRN has access to client portal.”

A December 11, 2014, Platte River Networks email between redacted parties says: “Its [sic] all part of the Hillary coverup operation I’ll have to tell you about it at the party”

An August 2015 email from Platte River Networks says: “So does this mean we don’t have offsite backups currently? That could be a problem if someone hacks this thing and jacks it up. We will have to be able to produce a copy of it somehow, or we’re in some deep shit. Also, what ever [sic] came from the guys at Datto about the old backups? Do they have anyway [sic] of getting those back after we were told to cut it to 30 days?”

[Redacted] is going to send over a list of recommendations for us to apply for additional security against hackers. He did say we should probably remove all Clinton files, folders, info off our servers etc. on an independent drive.
Handwritten notes that appear to be from Platte River Networks in February 2016 mention questions concerning the Clinton email system and state of back-ups

There was infighting over the processing of Hillary Clinton’s compromised emails:

In an August 2015 classified memo prepared by the FBI Counterintelligence Division regarding the findings of the ICIG with respect to Hillary’s email server, the FBI noted that the ICIG had found that in a sampling of only 40 of Hillary’s 30,000 emails, four classified emails were found. A subsequent letter sent by Sen. Richard Burr (R-NC) to ODNI Clapper regarding this sample of Clinton’s emails noted that they were all classified at the secret level.

In an August 2015 internal FBI memo, the FBI notes that Hillary Clinton had signed a June 28, 2011, official correspondence advising all State Department employees that, “due to ‘recent targeting of personal e-mail accounts by online adversaries,’ State employees should ‘avoid conducting official Department business from (their) personal e-mail accounts.” The same FBI memo noted that Under Secretary of State for Management Patrick Kennedy had sent a memo to all senior State Department officials on August 28, 2014, in which Kennedy included excerpts from the Foreign Affairs Manual that said that “classified information must be sent via classified e-mail channels only…”

The documents uncovered by Judicial Watch also show infighting between State Department Under Secretary Patrick Kennedy and the ICIG over the processing of the potentially compromised Clinton email communications.

A June 15, 2015, memo for the record prepared by the ICIG regarding the State Department’s review of Hillary Clinton’s emails indicates among other things that the retired foreign service officers that State was using to review Hillary’s emails were not “not optimal.”

“Cover up” by Clinton email vendor.

Intelligence IG concern that ALL her emails should be classified.

It is well past time for the DOJ to stop shielding Hillary Clinton and hold her fully accountable to the rule of law.https://t.co/7IsQfK0b1y pic.twitter.com/iBAkBZ2CRb

UNBELIEVABLE. We always knew, but to find it in writings makes it seem more real.

Thank you Judicial Watch for not giving up on finding out the truth.

She won’t go down quietly. It would be very interesting to see just how many she takes with her or trades ‘up’ for.