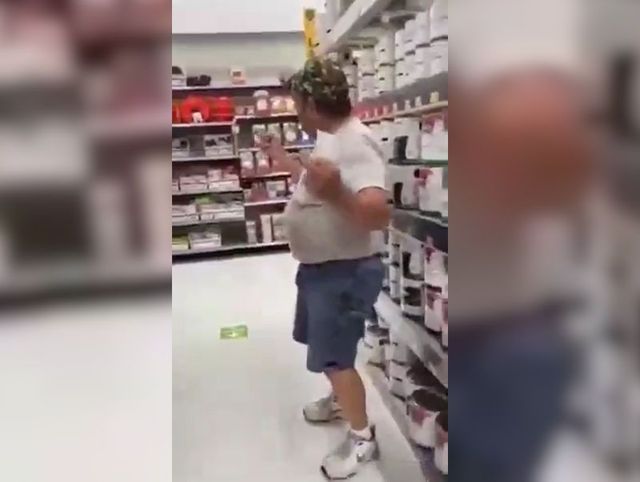 A man, minding his own business, was shopping at Walmart when two women accosted him while recording him with their video phones.

“Why don’t you get a life?” the man asked the first woman. “Going around taking pictures of people?”

“Yes, because of what you’re doing. Can you not follow the lines on the floor?” she yelped.

“I feel so sorry for you,” the man replied. “Keep your mouth running.”

She continued to berate him, claiming the government requires a face mask in public. He responded with a remark about how politicized the coronavirus and the guidelines have become.

“Now you have accosted me in this store. It’s not a law that I’ve got to wear a mask, and if you’re going to keep this up, maybe we’ll get the police department in here,” he said.

She accused him of accosting her by not wearing a face mask.

Meanwhile, the second woman came up behind him with her video phone.

“Oh God, another one!” he exclaimed when he saw her holding up her video phone. “You people are like monkeys falling out of a tree!”

The first Karen then said that he was the monkey, throwing in “dragging his knuckles,” Darwinism and evolution.

The man remained relatively calm, but he wasn’t about to put up with their nonsense without a response.

“You’re unbelievable! Good luck with the virus! Your whole family tree is getting cut off at its roots!” the first woman yelped, while the man told the second woman that he does not live his life on the computer and knows who his friends are.

“The way you people act, you’ve got no friends, because of the way you act,” he laughed, calling the woman a “smarta–.”

“I’d rather be a a smarta– than a dumb one like you!’ was her lame comeback.

The first woman probably thought she was a hero, but most twitter users commented that they thought the man was a hero. One twitter user claimed the man in the video became a local hero.

BizPacReview reported that the women ended up deleting their social media pages.