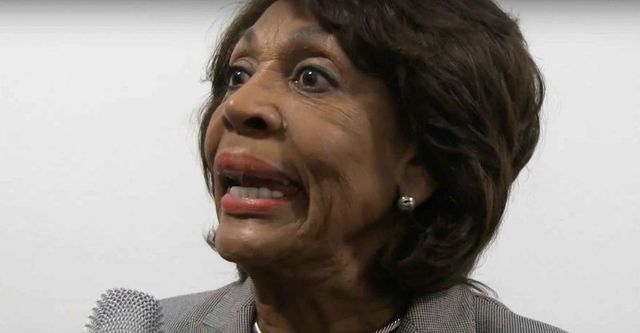 Maxine Waters is out and about telling people one thing and saying the opposite on national media.

At first she made the claim before the Mueller report was complete that “we  have all we need to impeach Trump.” Then she conceded there is “nothing there.” Now she is back out claiming Trump “certainly conspired with Kremlin and the oligarchs of Russia.”

Waters was speaking at Woman’s National Democratic Club in D.C. where they bestowed “Democratic Woman of the Year” for some reason. While speaking she decided to intensify Trump Derangement Syndrome on the audience by going into one of her typical Russia/Impeachment performances.

“Some people say how dare her come out and say, ‘Impeach him! She doesn’t know enough about him to talk about impeaching him.’ But now the American people whether they say it or not, they know that this man is dangerous. That he’s not capable of the truth,” Waters said.

“That certainly he conspired with the Kremlin and with the oligarchs of Russia. Certainly he has caused us to lose allies all over the world and they can’t believe we elected him to office.”

“But guess what? They’re going to believe it when we get rid of him. And I believe it’s going to be done. And I know we’re all worried about Special Counsel and the fact that we have a report that has been described to us in a letter by the Attorney General. We don’t know what’s in the report yet and we’re gonna demand it.”

Waters claimed six committees are working to bring down Trump, although she claimed on MSNBC only 3 people wanted it.

“Not only do we have the gavel, we’ve got subpoena power and we’re going to use it!” she said.

Then she told them that basically she thinks about Trump the fist thing in the morning until she goes to bed at nigh.

“I wake up every day, no matter what happens at night when I go to bed disgusted sometimes thinking what is this all about?” She said. “How are we going to make the world what we want it to be given that we end up with someone like this man in the White House? And I go to bed often times a bit disgusted and discouraged. But one nice sleep is all I need,” she said.

Then she is ready to spend her day obsessed with Trump gain I guess.

After calling the president “despicable,” Waters said, “Let me leave you with this: Despite the fact that we haven’t gotten the report yet and we’re going after it and it may be subpoenaed, that it is being worked on, I’m still saying, Impeach 45! Impeach 45! Imeach 45!”