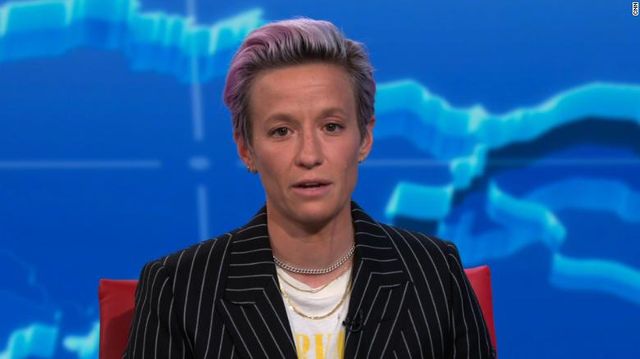 But it is what it is people seem to give damn about what Meghan Rapinoe has to say!

U.S. Women’s Soccer superstar Megan Rapinoe doubled down in her opposition to visit the Trump White House on Tuesday but expressed that she was open to accept invitations from anyone who “believes the same things we believe in” like Speaker Nancy Pelosi, D-Calif, and Rep. Alexandria Ocasio-Cortez, D-NY.

“I don’t think anyone on the team has any interest in lending the platform that we’ve worked hard to build and the things that we fight for and the way that we live our life,” Rapinoe said, “I don’t think we want that to be co-opted or corrupted by this administration… There are so many other people that I would rather talk to and have meaningful conversations that can really affect change in Washington than going to the White House.”

When asked if she had a message for the president, she took a moment to ponder.

But when she started talking about the Dems her tone changed!

“This is such a special moment for us and to be able to sort of leverage this moment, talk about the things we want to talk about and to celebrate like this with the leaders of our country is an incredible moment,” Rapinoe continued. “So yes to AOC, yes to Pelosi, yes to a bi-partisan Congress, yes to Chuck Schumer, yes to anyone else that wants to invite us and have a real substantive conversation and that believe in the same things we believe in.”


It wasn’t the whole women’s soccer team that was involved with any type of disrespect. Only two, or three of them, but they were the ones in the news, and tarnished the rest of the team! I have only seen one picture of Kelley O’Hara in the mainstream media.